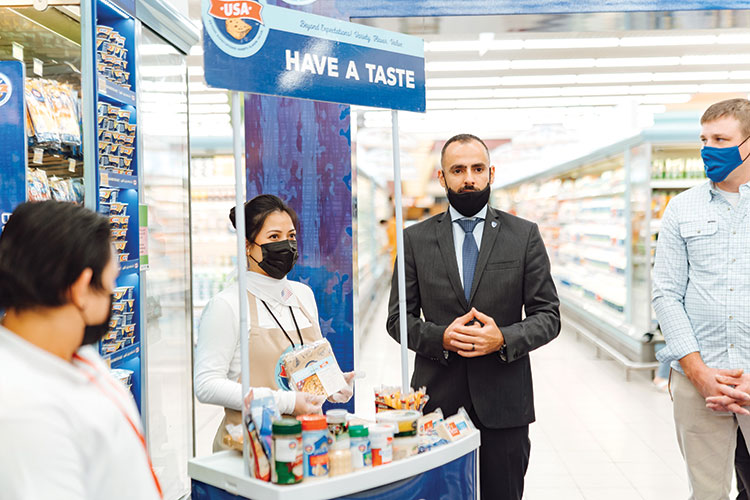 Meeting international consumers in their buying space will require constant attention from U.S. farmers and processors.

Consumers the world over are creating demand for more dairy products. Will the U.S. be prepared to fill that need?

For decades, New Zealand, the European Union, and Australia had largely ruled the dairy trade space. Back when the U.S. Dairy Export Council (USDEC) was formed in 1995, the U.S. was essentially a nonplayer in sales to customers outside its borders. However, at that moment in time, the U.S. dairy industry began to come out of a cocoon and transform itself into a player on the world stage of dairy product sales.

While many people cite the creation of USDEC as the moment that U.S. dairy got serious about serving global customers, another equally pivotal juncture took place one year earlier. That’s when the North American Free Trade Agreement (NAFTA) went into full effect. With NAFTA and USDEC in place, U.S. dairy processors began to engage their neighbors to the south.

Even though the U.S. and Mexico share a long border, the relationship building on dairy product trade was in its infancy in 1995. At that time, the European Union accounted for 42% of dairy product sales to Mexico and New Zealand netted another 36%. 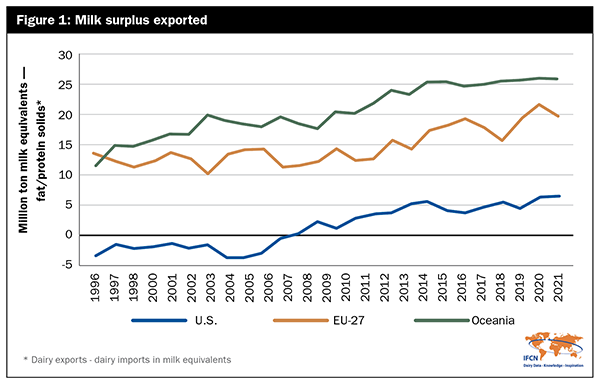 Fast-forward to the present situation.

The USMCA (United-States-Mexico-Canada Agreement) has replaced NAFTA. However, those two free trade pacts, along with a strong dose of relationship building, has more than galvanized the U.S. and Mexico relationship as major dairy trading partners. “Today, the U.S. accounts for 83% of international dairy product sales to Mexico,” shared Rodrigo Fernandez, the USDEC director for Mexico and Central America.

“Mexico is America’s number one dairy product customer, and it has grown into a $1.7 billion market,” continued Fernandez, in his comments during the joint annual meeting of the National Milk Producers Federation, the National Dairy Promotion and Research Board, and the United Dairy Industry Association in late October. “This took place even though Mexico’s dairy farmers have grown their milk production by 2.4% annually from 1995 to 2021.”

As for the world’s two leading dairy product exporters? “The European Union held a 9% market share in the Mexican market in 2021 and New Zealand netted just 5% of dairy product sales,” stated Fernandez.

The big two could stall

In recent months, headlines have beamed out across the Atlantic and the Pacific oceans from both New Zealand and the European Union. Government officials made mitigating climate change a top priority, and those leaders have their sights set on agriculture as a way to counter carbon and methane buildup in the atmosphere. More specifically, the livestock portion of agriculture is in the bull’s-eye.

“Across Europe and New Zealand, the future of dairy is being limited,” shared Jim Mulhern, who has spoken to a number of dairy leaders on both continents in recent months. “Because of our foresight and leadership, U.S. dairy is in a better position than others around the world,” continued the president and CEO of the National Milk Producers Federation (NMPF) as it relates to work on sustainability and climate mitigation.

“Look at the facts, not the rumors. People love dairy and dairy demand is growing,” shared Torsten Hemme.

“We think dairy demand will grow by 21% in the next 10 years,” continued the founder of the IFCN Dairy Research Network. “That is two times the U.S. and its current milk production level. So, over the next 10 years, we need to build a dairy industry two times the United States or 10 times New Zealand to feed the world with dairy,” he shared at the Global Dairy Summit held during the 2022 World Dairy Expo in early October.

“We have one Germany added to the global population each year. By 2030, we will add another 1 billion people on the planet.

“On average, a person on this planet consumes dairy comparable to a glass of milk per day and this will increase as well,” the German economist shared, holding up an 12-ounce glass.

Who will provide those dairy products?

Hemme contends that the U.S. is poised to enter a “Golden Era of Dairy.”

“New Zealand had a golden time, but we don’t think New Zealand’s net exports will grow,” said Hemme, with the “we” being the IFCN’s network of economists and researchers from over 100 countries around the globe. “Western Europe also had a golden time of growing exports after the end of quotas. Based on our current analysis, we think the major growth of dairy product exports will come to a close.

“Why should Europe feed the world with the resources we have?” Hemme said is the new question being asked on the continent by government leaders. “So, that would be a tremendous shift of world dairy markets.”

“There will be growth in net imports of dairy products, however,” said Hemme, noting this will take place even if exports from New Zealand and Europe stall. “The next biggest growth of exports we expect can be from the United States,” he predicted for the current year. He then made a much bolder prediction about the future.

“We also did the prediction through 2050. If you (the United States) continue on the current growth path, the U.S. has the potential to become the world’s biggest dairy net exporter by 2050. That begs the question, ‘Is the U.S. ready to enter its Golden Era?’

“Is the U.S. ready to move even further beyond self-sufficiency?” asked Hemme, noting that the U.S. could grow exports past one in six tanker loads of milk.

As to some potential challenges for the U.S., “How much is the U.S. taking social responsibility in the import markets?” he further asked. “Every minister of agriculture, in every important dairy product importing country, has one mantra: ‘More milk produced in my country, less imports.’”

Hemme continued, “I will tell you that politicians in those countries win elections on that mantra. For example, Nigeria wants to significantly increase its self-sufficiency in milk. At the present time, Nigeria is the biggest dairy importer in Africa,” Hemme pointed out.

“What is the strategy to make imports happen and self-efficiency grow at the same time?” Hemme asked the audience at the meeting organized by Wisconsin’s Department of Agriculture, Trade, and Consumer Protection (DATCP).

“Every important country will expect the U.S. dairy farmers and processors to develop and grow its local dairy industry. That might involve opening a local processing factory and helping to collect local milk. And, with helping to process that local milk, the U.S. would earn a license to import dairy products. That will be the deal in some growing markets.”

In wrapping up the discussion on this point, Hemme asked, “How many U.S. companies have overseas dairy companies? That’s the biggest challenge for the U.S.,” he said of his vantage point. While that may be one matter, many Canadian and European dairy processors have made investments in the U.S. because they are unable to grow production and/or sales in their respective home countries.

The U.S. definitely is poised to enter its Golden Era of dairy if it meets the challenges head on.

One thing is for certain. “For U.S. dairy farmers, dairy product exports are the path to growth,” said Hemme. “That’s because once you produce more milk, it will be consumed mostly outside the U.S. domestic market. So, once you grow milk production, you need to be internationally competitive with your costs. To help monitor that global cost scale, especially in times with a strong U.S. dollar, you can join the IFCN network.”