Bridging the gap between cows, curds and consumers 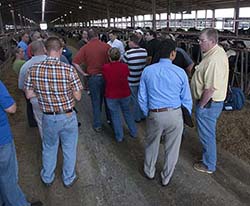 As each generation becomes farther removed from agriculture, it is increasingly more important to educate consumers about where their milk comes from. In Wisconsin, the Dairy Business Association (DBA) and Wisconsin Cheese Makers Association teamed up and did just that, hosting a "Cows to Curds to Consumers" field day on August 22.

Attendees for the day included about 30 state and local government officials. John Umhoefer, executive secretary of the Wisconsin Cheese Makers Association, explained, "In a perfect world, we would get everyone in the state on a farm." Since that is not a reality, DBA and the Wisconsin Cheese Makers Association created this opportunity to get leaders and decision makers on farms to see today's modern dairy industry, so they in turn can help spread the word of dairy to their constituents.

First stop for the group was Belgioioso Cheese, Inc., in Green Bay. Belgioioso Cheese began in 1979, when company president Errico Auricchio moved his family from Italy to America with the goal of starting a line of Italian cheeses. Today, Belgioioso processes milk from Wisconsin dairy farms in its seven state of the art processing plants. More than 2,000 cheese products are manufactured, aged, finished, packaged and shipped solely from their facilities.

In the afternoon, the tour led participants to County Aire Dairy Farm, located about 20 miles southwest of Green Bay. Mike Gerrits along with his brother Tom owns and operates the 3,000-cow dairy. Their grandfather began dairy farming at this location in the early 1900s, and the brothers took over the farm in 1985 when the herd was about 400 cows. Continued expansion has gotten the farm to its current size, and more change may be in the future as the fourth generation is now interested in joining the operation. 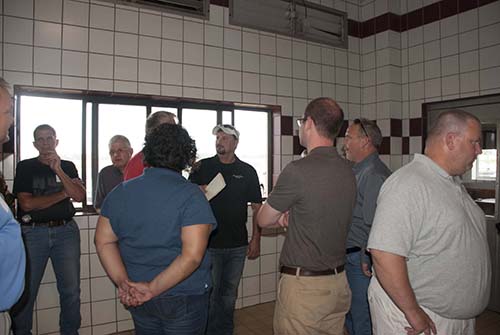 Cows are milked three times per day on a rotary parlor. Each cow produces 95 pounds of milk per day, and Mike explained to the group that the herd as a whole makes 270,000 pounds, or 450,000 eight-ounce glasses, of milk each day. About 40 employees are part of the operation. The Gerrits also do their own fieldwork and run about 5,000-crop acres.

This dairy field day has been held for the past five years at various locations in Wisconsin. Government officials from across the state, many with very little agricultural background, have had the chance to learn first-hand about the Wisconsin's $27 billion dairy business.

Looking beyond the crown
HD Notebook
Related to:
HDN, consumers
In HD Notebook