Cara Woloohojian and her cow Clara Bell steal the show. 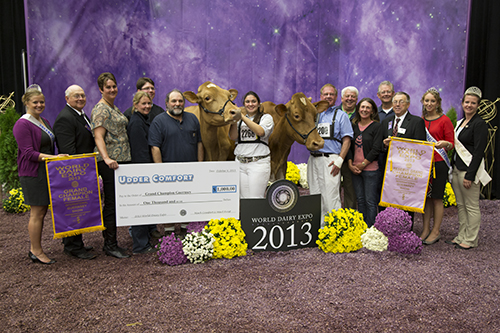 One cow was undoubtedly the star of the International Guernsey show on Friday. Wee Acres Spider Clara Bell, owned by Cara Woloohojian of Rhode Island, was the Senior and Grand Champion of the Junior and Open Shows. This 6-year-old cow was deserving of her clean sweep. Judge Gary Estes of Missouri and his Associate Judge Bob Griggs of Oklahoma recognized that there were a lot of great young cows in the show, but that Clara Bell is a tremendous cow and a handy winner. With 217 animals in the show, Estes also commented, "Maybe we didn't have all the numbers but we had the quality."

As for the older cows, Clara Bell went undefeated, but there were some quality cows standing next to her. Knapps Regis Tambourine-ET, owned by Austin and Landen Knapp, was Reserve to Clara Bell for Senior and Grand Champion of the Junior Show. Austin and Landen were also honored with Premier Breeder and Exhibitor. In the Open Show, Adams Creek Hillpoint Marsha-ET, owned by Adams Creek, Basse and Hillpoint of Wisconsin, was Reserve Senior Champion. Senior 2-year-old Millborne Hillpoint S Fiesta-ET was Reserve Grand Champion, a cow that Estes said has a great future.

Hoards at Expo
Gouda from the Netherlands to your backyard

Hoards at Expo
The Chew On This Tour drives onto Expo grounds
...
comments powered by Disqus