One of the earliest discussions on the farm bill took place on Monday, February 10, when Hoard's Dairyman presented "What does the farm bill mean to dairy?" Farm bill adviser, Scott Brown with the University of Missouri presented the webinar. He's no stranger to agricultural policy, as Brown has testified in front of both the House and the Senate on dairy issues.

Before the farm bill can be dissected, "forget all that you thought or heard about the farm prior to January 2014," said Brown.

It has some early components like the Dairy Security Act (DSA), Foundation for the Future (FFTF) and Goodlatte-Scott Amendment, but it has evolved a great deal since then. Producers need to pay attention to the final language and not the early proposals, he stressed.

While Congress passed the farm bill and President Obama signed it last Friday, it's now up to the United States Department of Agriculture to make the rules based on their interpretation of the farm bill language. 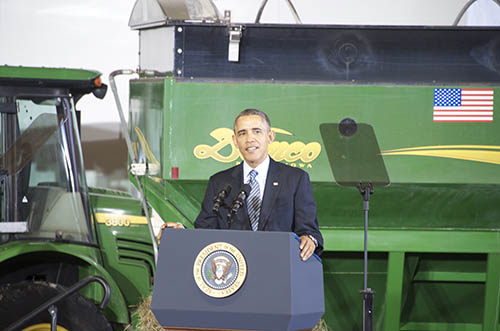 The dairy component provides insurance in cases where the gap between milk income and feed costs narrows to the insured level which ranges from $4 to $8. The milk price used is the monthly U.S. All-Milk price and the feed costs are a national monthly feed price based on corn, soybean meal and alfalfa hay. Producers participate by paying a $100 per year enrollment fee. They are automatically registered at the $4 margin coverage, up to 4 million pounds (annual) with no additional payment needed. Higher amounts of insurance and additional production levels will have additional premium costs.

Each herd's production base will be based on their annual production for 2011, 2012 or 2013, whichever is higher. Herds without a full year of production will have their value extrapolated to generate an annual level or their herd size will take the national production average. The USDA will adjust the base annually, depending on total U.S. milk production growth.

The expected start date is September 1. However, Brown suggests producers will be able to start enrolling this summer at their FSA office. Not all the details have been set by USDA yet, so there is some waiting until all the rules have been established.

Producers have the option to determine the margin amount (up to the $8 level) and the percentage of their production (in 5 percent increments between 25 and 90 percent) they want protected. Level of participation can be altered annually.

Brown's remarks can be summarized, "The farm bill is a great opportunity for risk management for dairy producers. It will provide a new level of flexibility for them. Each dairy is unique and needs to critically evaluate their level of risk. They need to crunch their financial numbers and strategically decide their level of participation."

This February webinar is archived and available for viewing. Other past webinars can be found at www.hoards.com/webinars.