While dairy cows aren't always an option, dairy steers can be just as valuable as a 4-H project. 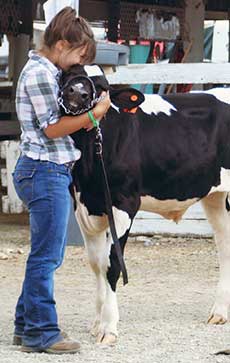 Every 4-H member has a unique story. Whether they've consistently bred show ring champions or have overcome obstacles to get where they are today, all of their tales are inspirational in some way.

Late last year, Megan McCoy's story came across our desks after her mother, Christal, wrote to us. Embracing her love of animals, Megan's father, who grew up on a dairy outside of Ashland, Ohio, was the driver behind her dairy steer 4-H projects. Below is the story we received from Megan's family:

Megan is a 14-year-old student at Buckeye Central High School in New Washington, Ohio. She is heavily involved in her local 4-H club (Good Luck Sheep) and FFA chapter. She comes from a long line of FFA members. Her dad was an FFA member at Hillsdale High School outside of Ashland, Ohio. Her two older brothers, Chris and Nick (a United States Marine), were also members of their FFA chapter. Her brother Chris was the reporter for his chapter and loved every minute of it.

However, Megan's story goes like this: From the day she was born, she had a love for animals. When she was 5 years old, she was diagnosed with congenital hip dysplasia. Something that was not caught at birth forced her to have several surgeries over two years. Megan endured three long hip surgeries that left her in a body cast for two summers in a row.

Megan even started first grade in her body cast until we went back to Children's Hospital to have it removed, only to find ourselves fighting a blizzard to get home to our other children. Megan never let the fact that she had to play with the other children on the playground using her walker stop her. Our answer to her loneliness inside was a pet of some sort. My husband, Mike, picked out a kitten from a barn of one his friends. The smile on her face was priceless, and she still has "Sleepy" to this day. Sleepy knew exactly what his role was, to stay by Megan and keep her company and entertained.

Then when she was 8 when she suffered a grand mal seizure. It was the scariest night in my life! My oldest son, Chris, and I had to perform CPR on Megan until the EMS arrived. Again, Megan never let this disability stop her from doing what she loved.

Shortly after that, we brought a special little Beagle named Milly into our lives, but mostly for Megan. The one thing that brought her calm and happiness was a love of animals. At 13 years old she joined our local 4-H club and, to be honest, I thought she should do cake decorating. Her father, on the other hand, who grew up on a dairy farm just outside of Ashland, Ohio, had other ideas.

The next thing I knew, we were shopping for two Holstein bull calves for her to show at the two local fairs. Her first two were named "Beefy and Meaty" and boy did the tears flow the day of livestock release. The only good thing was that we knew exactly where they went, and we were allowed to stop and visit anytime (we did, too).

This past year we grew the project to three calves named "Chuck" (for chuck roast"), "T-Bone" and "Buckwheat." We don't live on a big farm, only two acres to be exact, but we make do with small calf hutches that our FFA built for us, and then we move them to a mega hutch. Megan gets up at 5:30 every morning before school and feeds them, gives them a hug, makes sure they have plenty of fresh straw to keep them warm and tells them, "Stay inside where it is warm, and I'll see you after school."

Her ambitions are great, and her father and I will do everything we can to help get there. She would love to go to school to become a veterinarian, and I can see it happening. Above is a picture of her and Buckwheat, and the natural love for her calves is clear as day.

For 58 years, she read every word in Hoard’s Dairyman
HD Notebook
Related to:
HDN, youth, 4HClub, FFA
In HD Notebook

Life is all about perspective
By Hoard's Dairyman staff