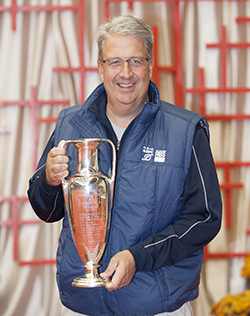 Tim Abbott, Enosburg, Vt., was named the 16th Honorary Member of the Klussendorf Association. Since the association was formed in 1937, 15 other men have received special recognition by the membership for their involvement with purebred dairy cattle.

This year's Honorary Klussendorf winner graduated from the University of Vermont in 1987 with a degree in animal science. As a youth, Abbott was the 1985 winner of the National Jersey Youth Achievement Contest. He started his career with the American Jersey Cattle Association and held positions as the northwest U.S. area representative and later manager of field services with the Jersey Marketing Service. In 1991, Abbott joined ABS Global and was responsible for sire selection and acquisition. He later became the general manager of ABS Canada.

In 2011, Abbott and his wife, Sharyn, purchased St. Jacob's Animal Breeding. As a team they started the "Judge's Choice Program" that engages well-respected judges to identify and acquire some of the best show-style bulls in the world.

It's also important to note that Abbott is a tremendous human being. He helped launch the Northeast Show Calf Summit seven years ago. This past year, 175 youth attended the two-day event where they learn firsthand from top show leaders on leading, clipping, feeding and other aspects of animal care.

On top of that, Tim Abbott was part of the team that donated an Aftershock daughter from the All American and All Canadian Dubeau Dundee Hezbollah cow. That daughter, Hez Ashock Ms Horace-ET will sell at the 2014 World Classic Sale at World Dairy Expo and all proceeds will go to the Horace Backus Scholarship Fund for the Young Dairy Leader's Institute.

Tim and his wife, Sharyn, are the proud parents of two daughters, Chelsea and Caitlyn, who are both students at Virginia Tech.