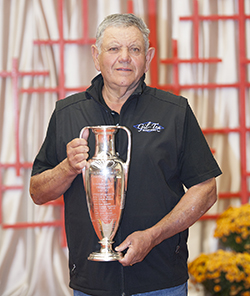 Gilbert Teixeira, Turlock, Calif., was named the 73rd winner of the Klussendorf Trophy, the highest recognition given to a dairy cattle showman in the United States.

The award is in memory of Arthur B. Klussendorf, considered the outstanding showman of his time and a model for all those who have followed him. Teixeira's selection was made by members of the Klussendorf Memorial Association, formed in 1937, at its annual meeting held earlier this week in Madison, Wis. He received the silver trophy designed by Tiffany Jewelers of New York City.

This year's Klussendorf winner is a great family man who has instilled his love for the Holstein cow in his entire family. After Teixeira's family sold the dairy farm when he was only 8 years old, he purchased a registered Holstein the very next year and the rest, as they say, is history. By the time Teixeira was a teenager, he bred and owned his first Junior All-American nomination as a senior yearling heifer and that animal repeated that honor the next year as a cow. From this humble beginning via a milking job he had through high school, Teixeira went from milker to part owner and today has a 1,400 Holstein herd nearly four decades later.

As Teixeira developed his family's dairy operation, the farm has gathered an impressive string of accomplishments:


In addition to the 73rd Klussendorf winner's accomplishments, Teixeira is a trusted advisor to others. Over the years, he has been a fixture reading pedigrees at sales throughout California and the entire western U.S. And in 2009, Teixeira acted as chairman of the National Holstein Convention Sale.

Gilbert and his wife, Linda, are parents of two adult children, Robert and Lindsey.