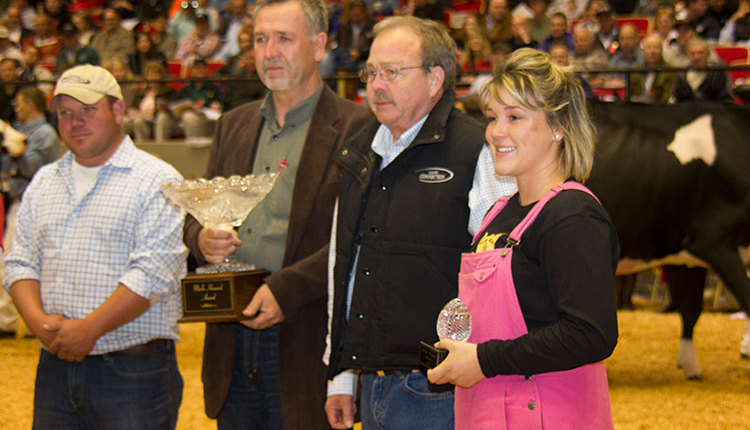 Stephanie Aves
Stephanie Aves' passion for showing dairy cattle demonstrated through her junior project work, has earned her the 2010 Merle Howard Award. The daughter of Kevin and Julie Aves of Popular Grove, Ill., Aves is the seventh person to receive this award. The Merle Howard Award is presented to the top junior exhibitor at World Dairy Expo who demonstrates exemplary skills in fitting, showmanship, and overall passion for the dairy industry.
This 20-year-old is very passionate about life and uses the talents God has given her to the fullest. A number of years ago this Illinois native was looking for a good calf to be a foundation for her herd and that is when Stephanie Aves started a lifelong friendship with Yvonne Preder of Plymouth, Wis. As Preder recalls, "She had the look in her eye that just told me she was the right person for this calf."
And the calf Aves purchased went on to win her class at the 2006 World Dairy Expo and was named Junior Champion of both the Grand International Red and White Junior Show and the Open Show. That was just the beginning. That same Red and White, Scenic-Edge Joyful-Red-ET, was named Grand Champion of the Red and White Show and was named the 15th Junior Supreme Champion at World Dairy Expo. The very next year, Joyful repeated as Grand Champion of the Junior Red and White Show.
Through a series of smart matings, this Popular Grove, Ill., native has further developed this cow family. At this year's show, St-yle-SA IZ Joytime-Red-ET, a daughter from the initial purchase was named Intermediate Champion of the Red and White Junior Show. Another daughter, St-yle-SA Jumpn 4 Joy-Red-ET, was first place junior owned animal in the fall yearling class. What's more, Aves has developed her marketing skills and has sold embryos around the world. Simply said, she is a self-starter who definitely has a budding career in the dairy industry. This University of Wisconsin-Platteville junior would be quick to point out that her dairy project is a family affair as she works as a team with her parents and brother Kyle.
Earlier in her young career, Aves won the Senior Showmanship Competition at the 2005 World Dairy Expo. At those earlier showmanship contests, contestants also had to compete in a fitting contest which this young lady won quite handily as she expertly maneuvered the clippers and other fitting gear.
Also a talented judge, Aves competed in the 2008 National 4-H Contest and was member of the fourth place Illinois judging team and was twelve individual. Now competing at the collegiate level, she was a member of the second place University of Wisconsin-Platteville team at the 2010 Accelerated Genetics Intercollegiate Judging Contest where she was tenth place individual. In 2009, the Red and White Dairy Cattle Association recognized her as their top junior by awarding her the Junior Breeder Award.