Beef remains the most common, and most valuable, protein used by foodservice operators. 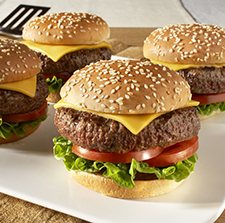 With more meals being eaten away from home now than ever before, we as farmers depend on restaurants, schools and other foodservice providers to serve our products to customers.

Fortunately for dairy and livestock producers, beef remains a staple protein for foodservice operators. Research and consulting firm Technomic has conducted annual studies to investigate the usage of beef and chicken in the foodservice industry since 2003. What they found in 2014 is that, while the overall volume of beef used by foodservice was down slightly, the total dollar value was up.

Almost all foodservice operators (96 percent) use some sort of beef, the survey revealed. Ground beef is the most commonly used cut of beef in foodservice, representing about three-fourths of all beef used. All categories, except for ribs, experienced some decline in 2014, with steak falling the most at 5 percent. The biggest drops in beef usage were seen in the areas of lodging, schools and full service restaurants.

The total food service protein market represented over 25 billion pounds of food in 2014. Total volume was up 107 million pounds from 2013 and has risen almost 400 million pounds in the last five years.

As for protein, while beef was down 152 million pounds in 2014, chicken and pork grew 82 million pounds and 140 million pounds, respectively. Beef still, however, makes up the largest sector of protein used in foodservice and represents almost 25 percent of the overall dollar value.

Even though milk is our main source of income, meat is a valuable by-product of the dairy cow, and farmers benefit when demand for beef is strong. More than 90 percent of American adults eat beef at least once per week, and more than half eat it at least three times per week. Many of those meals take place away from home, so foodservice operators' eagerness to use beef has great value to dairy and livestock producers alike.