It’s a double shot of Tequila

By Patti Hurtgen, Online Media Manager
There was no denying Strans-Jen-D Tequila-Red-ET. She paraded beautifully around the ring as if she already knew the show's outcome. And it was old habit for her, as Tequila took the same honor at last year's show. This Director daughter is owned by MilkSource Genetics, Wis.

Judge Pat Conroy of Indiana and his associate judge, Joel Lepage of Quebec, placed the International Red & White Show on Thursday afternoon and Friday morning at World Dairy Expo. Conroy commended the exhibitors this morning for an "awesome cow show!" And remarked at the amazing progress the Red & White breed has made over the years. 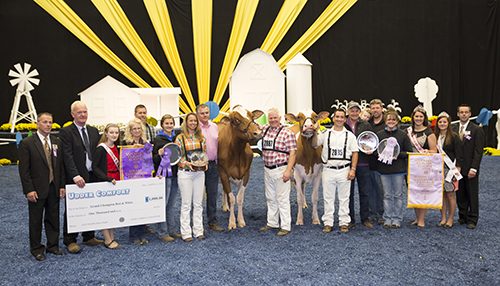 Tequila-Red topped the 4-Year-Old class, and following her in class, and all day long, was Ms Stranshome Alltheway-Red, as this Redliner was named Reserve Senior and Reserve Grand Champion of the show for her owners Glamourview – Iager and Walton of Maryland.

Grand Champion of the Junior Show was Cleland Absolute Coleen-Red, owned by the Stransky brothers of Minnesota. She was the winning 5-year-old, of both the Open and Youth Show. New York's Cyrus Conard took home Reserve Grand Champion with his 125,000 Lb Production Class winner, Ridgedale-T Raichu-Red. This Talent daughter also won the open class and was best bred and owned in class.

In the heifers, Brock Liddle of New York took the banner for Best Heifer of the Junior Show with LME Armani Rascal-Red, the winning winter calf who also placed third in the Open Show.

To see more highlights of Friday's events, including video from the show, click this link.