By Patti Hurtgen, Online Media Manager
After seven years of Braedale Goldwyn taking Premier Sire honors, there is a new king of the ring at the International Holstein Show in 2015. The Intermediate Championships went to two Pine-Tree Sid sisters, Jacobs Sid Beauty-ET and Bergeroy Sid Ambelle. The junior-3-year old is owned by Eaton Holsteins, and the Murphys of New York and Bergeroy Holsteins of Quebec owned the senior-3-year-old, respectively. In addition, Sid also sired the winning milking yearling, solidifying his Premier Sire status. 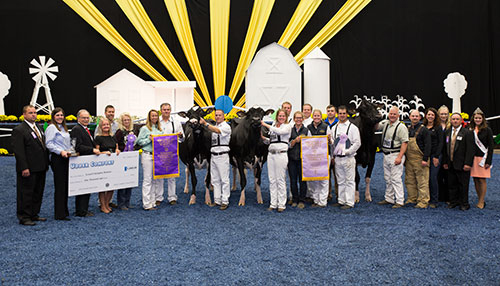 But, it was the Goldwyn matrons who were named the Grand and Reserve Champions. Lovhill Goldwyn Katrysha for MilkSource and Jacobs Goldwyn Valana, both emerged from the Aged Cow class. With Grand Champion and several high placing cows, Premier Exhibitor banner was awarded to MilkSource Genetics of Wisconsin. 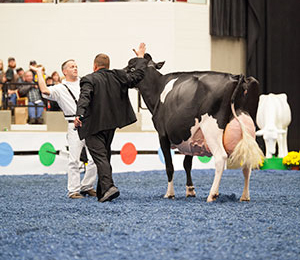 When commenting on the Best Bred and Owned class, Judge Thomas was impressed with the group assembled before him, "This is quite a feat to breed this caliber of cows. You all should be very, very proud." He selected his aged cow, Jacobs Goldwyn Valana, bred and owned by Ferme Jacobs of Quebec as the Best Bred and owned of Show. It was no surprise that they also captured Premier Breeder and won the Best Three Females Class.

The Junior Champion honor was won by the Fall Calf, Golden-Oaks Sid Charlise. She is owned by Hill, Borba, Connelly and Merwarth of Maryland. The Fall Yearling, Stranshome Gold Annice-ET was tapped as Reserve for Budjon Farms of Wisconsin and Peter and Lyn Vail of New York.

Nathan Thomas of Ohio and Eddie Bue of Illinois served as the official judge and associate for the International Holstein Show. Classes were large in size; at times cows were tight to the railings as quality ran deep.
Related