Take the weight of the world off your fields

Steps can be taken to measure the impact of soil compaction and, more importantly, avoid it in the first place. 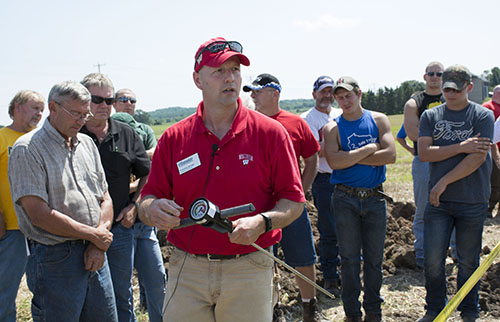 Bigger tractors and heavier machinery allow crop growers to cover more ground in a shorter period of time, enhancing productivity. Unfortunately, they can also leave a less than desirable impact on soil health in the form of compaction if not used carefully.

Soil is a three-phase system comprised of solid, liquid and gas. In between the soil particles is pore space, and the amount of pore space is known as soil porosity. This pore space is important for the gas exchange that gets oxygen to roots for respiration needed for nutrient uptake. It also helps ventilate carbon dioxide from the soil.

Soil compaction reduces the amount of pore space, which in turn lessens aeration, water retention, and water movement in the soil. It can affect plant emergence and development, nutrient uptake, and yield. How can you determine if your fields are affected by compaction?

"A penetrometer is a very useful device to figure out if you have any soil compaction issues in your fields," he said. This commercially available unit has a T-shaped handle, a shaft, a gauge, and two tips. Arriago explained that the smaller ½-inch tip would be used on soils that are harder; the bigger ¾-inch tip would be used in looser soils with better structure.

The gauge has a scale that measures PSI (pounds per square inch). Measurements fall into a green, yellow or red area. Green is 0 to 200 PSI, yellow is 200 to 300 PSI, and red is 300 PSI or higher. Soils at this level are considered root restricted and have soil compaction issues.

"Take those readings with a grain of salt, though," Arriago advised, as other factors, like moisture and clay content, affect the measurements. While there is no correction for moisture or clay content, one can properly adjust for these factors by testing a low-traffic area of a field first and using those results to calibrate the penetrometer.

By measuring the amount and depth of compaction, tillage equipment can be set at the appropriate level to repair some of the damage.

When it comes to reducing soil compaction, Arriago said, "If you can get away with using a smaller piece of equipment to get the job done, that is always my recommendation."

Other ways to minimize compaction include:

Those are farmer words
HD Notebook
Related to:
HDN
In HD Notebook

A different kind of graduation
By Abby Bauer, Associate Editor