The quality ran deep in the International Red & White Show. 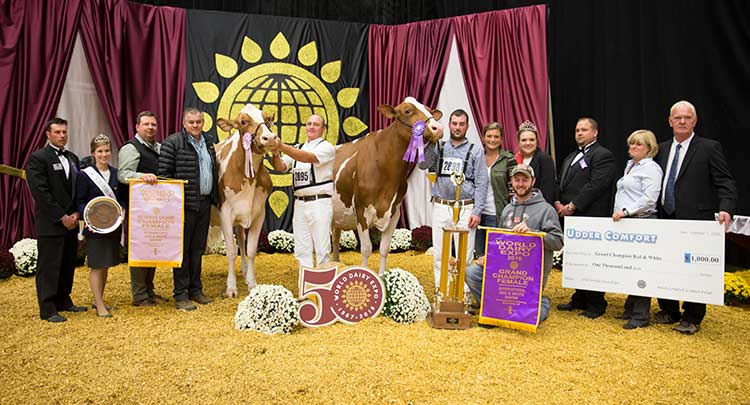 Pheasant Echos Turvy-Red was the winning 5-year-old, Senior Champion, Grand Champion, and Best Bred and Owned of the Red & White Show. Maryland’s Kenny Stambaugh is the breeder, owner and exhibitor of this KHW Advent-Red-ET daughter.

The Junior Champion was Booth-Haven Lady In-Red-ET. She was bred and exhibited by siblings Cole, Ava, Campbell, and Royce Booth, Wisconsin, and won the Spring Yearling class. Reserve went to Greenlea Ad Annie-Red-ET, exhibited by Mike Heath and Mark and Will Iager of New York. Milk Source was Premier Exhibitor and Premier Breeder of the heifer classes.

A favorite class for breeders is Best Three Females. Jason Cleland of Wisconsin took top honors with two cows he exhibited and Cleland Advnt Alexia-Red-ET, the Reserve Senior Champion, who is owned by Golden Oaks, Illinois.

Premier Sire was awarded to Apples Absolute-Red-ET. It was the first time he earned this honor, dethroning Advent-Red, who is a brother to Absolute’s dam. 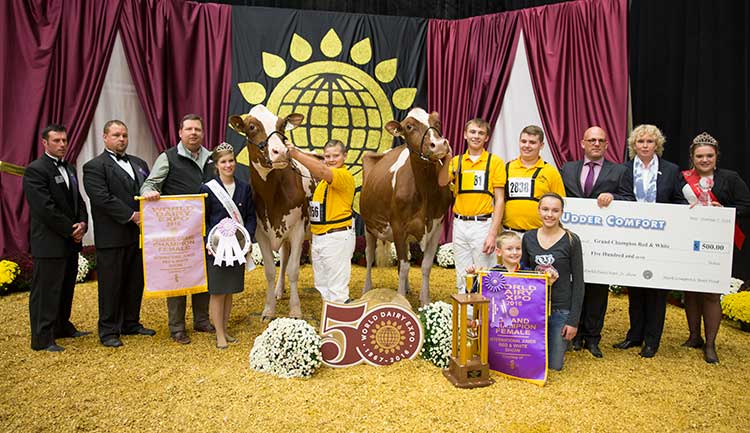 There were four very excited junior members when the Grand Champion of the International Red & White Show was announced. Milksource Dty Tammy-Red-ET was led by co-owner Dawson Nickels and joined his sister Kylie and Grady and Lane Wendorf of Wisconsin in the winner’s circle.

Junior Champion of the Junior Show went to Lyn-Vale Cherry Wine-Red, also owned by the Booth siblings. Reserve went to Del-Frie-Acres Ad Ruthy-Red. She is owned by Joseph Thomsen of New York.

Best Bred and Owned of the junior show went to Morgan Olbrich of Illinois with Holbric Action Chill-Red.

Judge Nathan Thomas judged 250 head in the International Red & White Show. He was assisted by Matt Templeton of Australia.

It was all purple for the Red and Whites
Hoards at Expo
Related to:
HAE, WDE, shows, RedWhite
In Hoards at Expo