Picking Apples with each reach in the Red & White Show

The vast majority of winners descend from Apple-Red genetics. 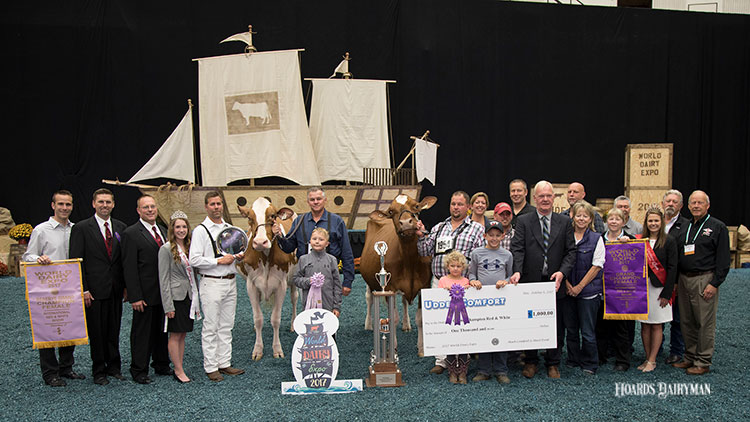 The sweetest Apple in the basket was Meadow Green Abso Fanny-Red, the winning Aged Cow. In addition to being named Grand Champion of the International Red & White Show, she also was awarded Best Udder of Show. She is owned by Triple-T Holsteins, Mike Berry, Frank and Carol Borba, and Frank and Diane Borba. Fanny-Red is housed in Ohio at Triple-T Holsteins, but Fanny’s offspring are located in both California and Ohio.

The Reserve Senior Champion was Miss Apple Snapple-Red-ET, also owned by Milk Source. Snapple is a Redburst from the original Apple. She topped the 4-year-old-class.

Junior Champion was Greenlea Ad Annie-Red-ET. This Winter Yearling is owned by Michael Heath and cousins, Will and Mark Iager in Maryland. Her dam is an Advent daughter. Reserve Junior Champion was Ms-AOL DB Raspberry-Red-ET. Jaydyn Kimball of Maine owns the winning Fall Calf, who is sired by Mr D Apple Diamondback. Raspberry also claimed Junior Champion of the Junior Show. 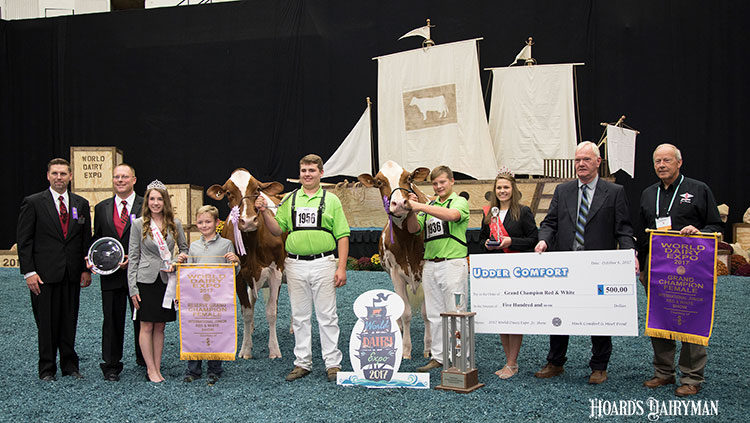 Premier Exhibitor was awarded to brothers, Grady and Lane Wendorf of Wisconsin. These junior exhibitors had a great day, including Reserve Grand Champion of the Junior Show with Milksource Dty Tammy-Red-ET, the winning 5-year-old. Tammy’s dam is sired by Advent. They also had Reserve Junior Champion of the Junior Show with Cleland Defiant Kailene-Red, an Advent granddaugher.

Champion Bred and Owned of the Show was awarded to Britney Hill of Vermont. This Redburst daughter is from an Advent dam.

Grand Champion of the International Red & White Junior Show was Redtag Destry Sneezy-Red-ET. Sneezy is owned by Chase Savage of Maryand and is the only Champion without Apple in her DNA.

Chad Ryan was the lead judge and was assisted by Brian Kelroy, together they placed 262 Red & White entries.