40th Anniversary of Cows on the Concourse continues a Madison tradition. 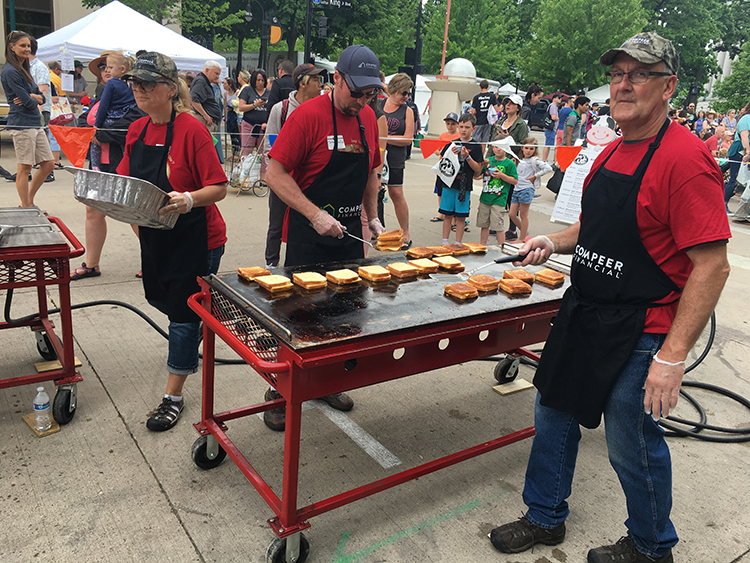 For the past 40 years the Dane County Dairy Promotion Committee has organized a free dairy promotion event just steps away from the state capitol of America’s Dairyland. Cows on the Concourse is run by dedicated volunteers who saw a need to keep dairy in the minds of consumers, and the state capitol is the perfect backdrop.

I have volunteered for the last 10 years, and each year, I am reminded of the power of bringing animal agriculture to the people — the smiles and enjoyment of everyone that stops by brings me back every year.

Held the first Saturday in June, it draws a large crowd as it’s held at the same time as the Dane County Farmers’ Market that completely surrounds the Wisconsin Capitol’s outer perimeter during the summer. It brings urban dwellers just feet from this “dairy block party.”

The Cows on the Concourse display spans from Madison’s Capitol Square, down Martin Luther King Jr. Boulevard, to the Monona Terrace. The block-long event features a tent with live animals that attendees can pet. Volunteers stand by the cows and calves to answer any questions. Tents and booths promoting dairy, selling food, and providing educational material for the public line the rest of the street. Capping it off, live music at the entrance of the street welcomes attendees. Lines for milk, ice cream, and the especially the grilled cheese hover around 20 people throughout the day as guests anxiously await the best deal around, a $2 grilled cheese sandwich. It is non-stop traffic before the official opening at 8 a.m. until the gooseneck trailers have loaded the cattle, tack, and shavings and headed back to their homes around 2 p.m. Committee organizers did some pre-event promotion with the local media. Television stations came to the event as well. Here is a clip from the local ABC station.

One television host wanted to shoot his opening segment between the two grills (as the two bread and cheese runners swiftly assembled and removed the finish product). They managed to avoid him and his microphone throughout the taping.

At the end of the day, hopefully people learned more about dairy, enjoyed the perfect grilled cheese sandwich, and left the Capitol Square area feeling good about their experience. And remember the personable faces that cooked their food or knelt while a young child touched the nose of a week-old calf. The dairy industry needs friends, and I think we made a few on Saturday.

To learn more about Cows on the Concourse, check out their website.

Join us on June 10 for our next webinar:

Heifers do not provide a return on investment until after entering the milking string. New synchronization strategies have been developed to enhance reproduction in heifers. These concepts aid dairy producers in optimizing age at conception and age at first calving goals while limiting feed costs. Sign up here.

Make the most of your assets
HD Notebook
Related to:
HDN, dairy promotion
In HD Notebook