Last month over 30 4-H, FFA, and post-secondary students from the United States traveled to Scotland as part of the International Dairy Judging Tour. They participated in the Royal Highland Show in Edinburgh, Scotland, and judged four classes of cows and delivered two sets of reasons. Learn more about how this contest is organized in a previous blog. 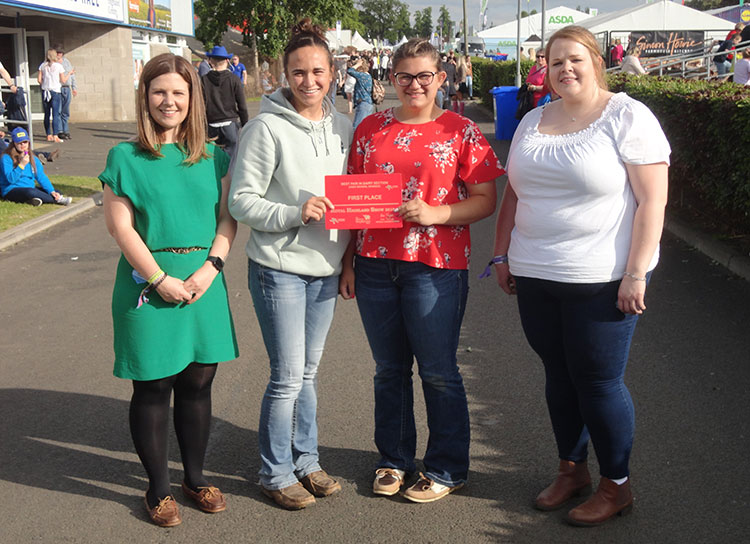 Colorado 4-H members Kyndall Tucker and Awna Hirsch with the two Scottish Young Farmer representatives on each side.

When the results were tallied, there was a tie for the top pair. (Teams consist of two people rather than the traditional three or four). A tie was not surprising with the combinations of 2, 4, and 6 for cuts in every class. The top pairs were Awna Hirsch and Kyndall Tucker from Colorado 4-H and Cole Mahikuch and Rachel McCullough from Wisconsin 4-H. Awna was the high individual at the National 4-H Contest last fall, while Wisconsin 4-H was the winning 4-H team with Cole and Rachel and teammates Brian (Mac) McCullough and Clayton Mahikuch, who were the third placing pair in Edinburgh. Osceola (Wisconsin) FFA and Spencer County (Kentucky) FFA completed the top five pairs in the youth division. 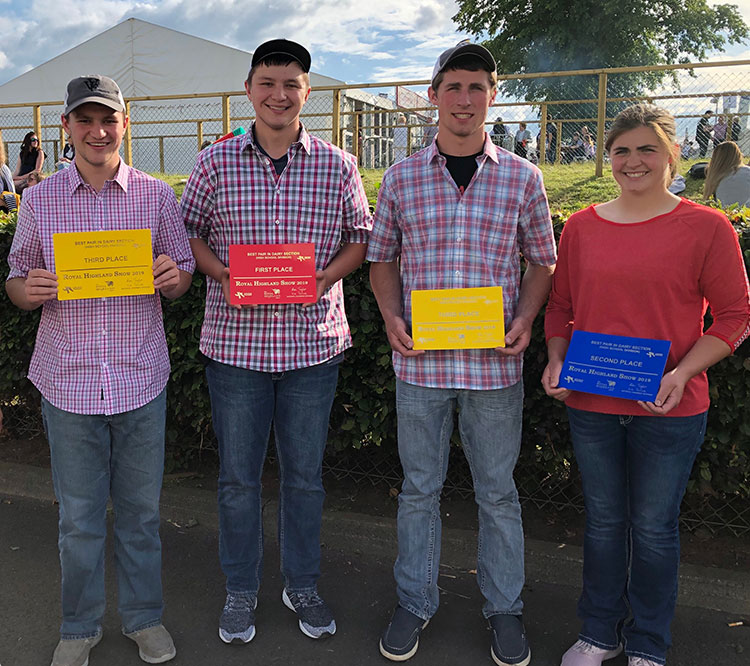 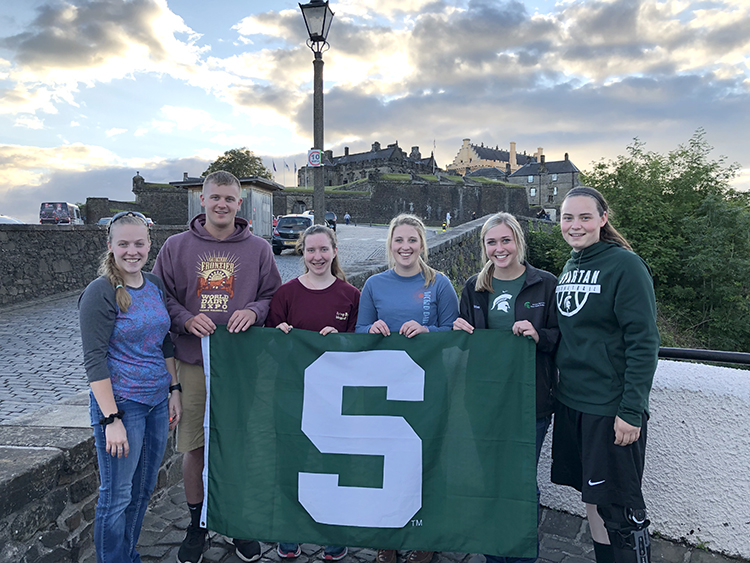 But, in this author’s attempt to translate the results into more familiar formats, I created my version of the results:

Michigan State’s Ag Tech Student Kristen Burkhardt out-talked them all with a 93 on her reasons. Teammate Beka McDonald received an 85 to rank her among the top reasons scores (if they combined youth and post-secondary).

I spoke with the six winning pairs (three youth and three post-secondary). They shared their thoughts on the contest and the experience.

Cole Mahikuch, complimented the cows used in the classes, “They were very nice uddered Ayrshire cows. They were not as large framed as the Ayrshires in the U.S. The Holsteins were stronger and were moderately sized. Regardless of country, they still needed good udders to place high.” Kristin Burkhardt from Michigan State Ag Tech agreed with Cole, in that the cows were smaller than ones back home. Teammate Mariah thought the European cows might be stocky in their build, but was pleasantly surprised with their modern appearance.

When Mac walked through the barns at the end of the competition, he noticed North American bulls were used quite heavily when reading the signs above the cattle.

As was shared in an earlier blog post, there are some differences in this Scotland contest and judging in the United States. To prepare, the Colorado 4-H team practiced giving reasons using the ABXY letting system (instead of A,B,C,D or 1,2,3,4) so it would seem more natural.

Colorado 4-H’s Kyndall Tucker stated, “I love the rush of it,” referring to the five minutes she had to place a class and take notes for her reasons. “Going back to 15 minutes to place a class at home will be easy!” she announced.

“With only five minutes, I did not have time to do my regular double checks before turning in my card. It just happens, you cannot wait,” shared 17-year old Awna Hirsch from Colorado 4-H.

“I had to make split second decisions and take notes for my reasons. I wrote the bare necessities and turned in my card within the five minutes. My reasons were shorter than normal,” remembers Mac McCullough.

“There is not a lot of time to judge, but when I was in the ring, it felt a bit longer than five minutes,” commented Gerrit Baker.

“That five minutes forces you to come to a decision faster,” stated Lynn Olthof.

When giving reasons, there was the official judge and a person keeping time. Reasons that were longer than 2 minutes in length were deducted – 2 points for every 10 seconds over the time allowed. Rachel McCullough explained the students were not discouraged from using their notes for reasons, but still had to deliver them with confidence.

“Four classes and two sets of reasons is not enough. I wanted more,” Beka McDonald enthusiastically declared. Elise judged Holsteins and Ayrshires, but would have liked to evaluate other breeds, too.

“This trip was a reward for our judging success. We wanted to represent Wisconsin to the best of our abilities,” said Clayton.

“Being invited to participate in this contest was a huge incentive to do well at Expo. We worked toward this goal for a long time,” mentioned Kristin. Michigan Ag Tech has had two previous teams travel for the international competitions so they knew what was waiting for them.

The five young ladies from Michigan will continue their studies at Michigan State and look forward to being on the dairy judging team on the collegiate level.

The Wisconsin 4-H team shared that this format was fun, yet more challenging.

“This contest was different, but enjoyable,” concluded Awna.

“It’s a great trip and lots of fun. It’s a once-in-a-lifetime opportunity with my best friends,” declared Gerrit.

There will be additional blogs about the International Dairy Judging Tour in upcoming weeks. Here was the previous post: