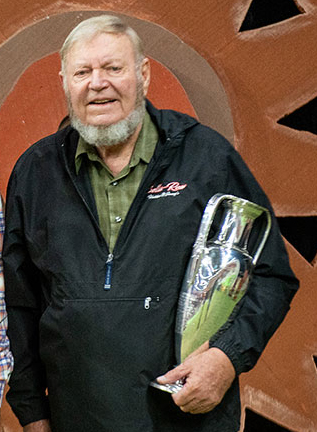 Ken Melvold
Ken Melvold of Fresno, Calif., was named the 78th winner of the Klussendorf Award, the highest recognition given to a dairy cattle showman in the United States during the 53rd World Dairy Expo. Melvold is a humble, friendly, and kind human being, and these attributes may mask that fact he is a tremendous cowman and great competitor.

The award is given in memory of Arthur B. Klussendorf, considered an outstanding showman of his time and a model for all those who have followed him. This year’s selection was made by members of the Klussendorf Memorial Association, formed in 1937, at its annual meeting held earlier this week in Madison, Wis. Melvold received the silver trophy designed by Tiffany Jewelers of New York City.

This year’s winner showing experiences started like many others with a 4-H project and progressed from there. During college, Melvold worked with the Piney Hill West show herd, traveling up and down the California circuit. The string would show all summer and end up at the California’s Cow Palace and then on to Waterloo, Iowa, at the National Dairy Cattle Congress.

It was during this time that the 78th Klussendorf winner rubbed elbows with the likes of Henry LaFranchi, Stuart Rowe, Harlan Askelson, Al Hay, and many more. As these relationships grew, Melvold would work for such herds as Willomonte in Nevada, Champ Goodwood in Missouri, Dreamstreet in New York, and Bottema Farms in Indiana. Melvold also worked with some of the best herds throughout California and assisted or managed hundreds of sales in all dairy breeds throughout the U.S.

If success is measured in miles traveled, few can match Melvold’s odometer from boxcar to airplane.

If success is measured in ribbons, banners, and trophies won, the trophy case would be overflowing.

Most importantly, if success is measured by friendships gained and grown throughout the years, few in dairy circles could match this Melvold’s success. Simply stated, Ken Melvold is one of the most popular people in our business.

Serving as the meeting place of the global dairy industry, World Dairy Expo brings together the latest in dairy innovation and the best cattle in North America. Crowds of nearly 70,000 people, from 100 countries, will return to Madison, Wisconsin for the 53rd annual event, October 1-5, 2019, when the world’s largest dairy-focused trade show, dairy and forage seminars, a world-class dairy cattle show and more will be on display. Visit worlddairyexpo.com or follow us on Facebook, Twitter, Instagram, Snapchat, or YouTube for more information.