“A huge, powerful, and overwhelming force or institution.” That is the definition of juggernaut, and Spencer County FFA in Kentucky has certainly earned the description after claiming their seventh consecutive National FFA Dairy Cattle Evaluation and Management Contest title. And, keep in mind, once a student judges in this contest, they cannot judge again. This means 28 national champion students in seven years. Few high schools in any discipline can demonstrate this type of dominance.

Each student places six classes representing three breeds (Holstein, Brown Swiss, and Jersey), gives three sets of reasons (one per breed), and takes a written test, which includes evaluation of Dairy Herd Information (DHI) records. The points earned are then added to a group presentation score. This team activity includes evaluating a farm and providing feedback in the form of an oral team presentation where all four youth discuss the farm’s recommended animal health protocols. 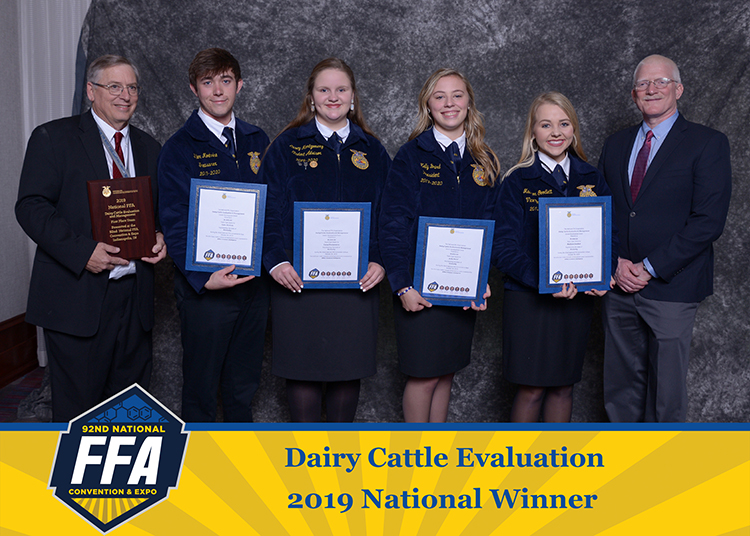 Amery FFA in Wisconsin placed third, just nine points behind Illinois. Team members were Courtney Glenna, Kathrine Elwood, Hailey Clausen, and Ella Williamson. The top three teams are invited on the International Dairy Judging Tour next summer in Europe. They will compete at the Royal Highland Show in Edinbugh and tour dairy operation in Scotland and Ireland as well as historic locations.

Ionia FFA in Michigan and Maquoketa Valley FFA in Iowa had all four team members earn gold emblems and placed fifth and sixth, respectively. Rounding out the top ten were Ohio, Pennsylvania, New Mexico, and California. Additionally, Billings FFA in Montana, Plainview-Elgin-Millville FFA in Minnesota, and North Iredell FFA in North Carolina also earned gold team emblems. North Carolina was the only other team with all four students earning gold rankings among the 43 state teams.

Not to be outmatched by Kentucky’s win, Miriam Cook of Ionia FFA dominated the contest winning by an amazing 43 points! She won the Brown Swiss, Jersey and oral reasons portions.

Courtney Glenna of Amery FFA had the high score on the written exam with 132 points out of a possible 150.

Dairy Handlers Contest
In a separate contest, the dairy cattle handlers activity is evaluated during the Dairy Cattle Evaluation contest in Indianapolis, Ind. The leadspeople for the judging contest each won their state contest and presented the animals for the FFA members to judge. As leadspeople, they were evaluated for their skill at presenting the animal they were given. The top three individuals were Katheryn Longenecker of Central FFA in Pennsylvania, Perry Baird of Woodbury FFA in Tennessee, and Austin Baker of Providence Grove FFA in North Carolina.