By Hoard's Dairyman staff   @hoardsdairyman
We've talked about it before (see our blog, Wars we wage in dairy and agriculture and our editorial from the June 2011 issue, Keep chocolate milk in schools), but, like heat in the summer, the issue of what to do about chocolate milk just won't go away. 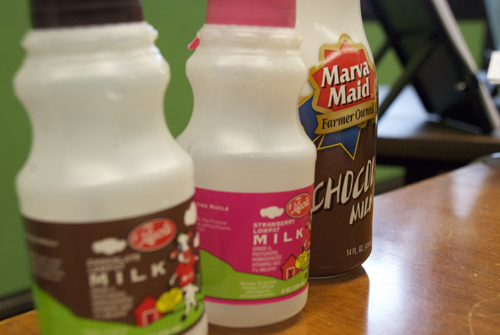 One of the factors behind this is Jamie Oliver, a celebrity chef. We have no doubt he has a vast knowledge of the culinary arts. He can fry an egg, toss a salad, and many other things that it would take our editorial staff three tries to get right.

Oliver is also a philanthropist. He put his house up as collateral to begin a foundation for disadvantaged kids, according to the New York Times. On his current show, Jamie Oliver's Food Revolution, (where much of this chocolate milk stuff started) he tried to fix first the Huntington, W. Va., school district's lunch menu in the first season (2010). This year, he is through five episodes of six based in the Los Angeles Unified School District (and his ratings fell after the first episode so ABC pulled the show after the first few weeks of May sweeps to play during June instead).

There's no doubt that Oliver is probably able to find a lot going on in two of the poorest school districts in the nation. Their lunch program is probably the last thing on their minds, and having well-fed kids probably would help many other things in the schools. I wish I had the time (and resources) that he did to help in such a substantial way. By the looks of it, he's used only his skills and personality to get to where he is, and he deserves all the credit for what he's done.

But he's wrong on chocolate milk.

This is a delicate issue. We don't envy our friends at Dairy Management, Inc., in the task of being selfless, promoting milk, and telling the truth all at the same time. But, I think the dairy industry has a good track record. Of course, we want everyone to consume dairy products, but we've probably created one of the most selfless and factual programs that ever existed for kids: Fuel Up To Play 60, in partnership with the NFL.

If you go to FuelUpToPlay60.com you'll see no mention of dairy, besides the National Dairy Council's sponsorship logo in tiny print at the bottom. If you navigate to the nutritional information, you might find dairy listed a few places, but it also lists all the other food groups in the correct portions – again with no support from the fruit, vegetable, or cereal grain growers of this country.

To add fuel to our fire, we learn in our July issue's People Side page (it will be on page 462 of next month's issue) that China is still moving forward with their one-glass-of-milk-per-child goal. Also, the Washington Post reported yesterday evening that even first graders agree that chocolate milk should be in schools. This has caused the Washington, D.C., city council chairman, Kwame Brown, to ask the D.C. Schools' Chancellor, Kaya K. Henderson, to reconsider that decision. That first grader has nothing to do with the dairy industry, but that article sums up the quarry well:

"The permissivists hold that chocolate milk isn't nutritionally ideal, but it is milk, and sugary milk is better than other equally sugary beverages that don't have the protein, vitamins, and calcium milk does.
The prohibitionists hold that kids don't need any added sugar, and that, if they don't drink plain milk, they can get calcium and other nutrients from other sources. If kids substitute fruit juice, they argue, the "natural sugars" therein are preferable to the corn syrup or cane sugar in flavored milk."

So, when will it end? We don't know, but we hope more people agree with first-grader Aiden Murphy, who submitted this testimony at one of the D.C. Council's youth hearings: http://www.scribd.com/doc/58417723/Aidan-Kohn-Murphy-Chocolate-Milk-Testimony.

Check out his survey at the end; I hope we can duplicate it elsewhere.

A showring recap from a 4-year-old
HD Notebook
Related to:
HDN, dairy products
In HD Notebook