A pair of cousins led the Illinois’ Eastland FFA chapter to the 2021 national title. Cousins Delana Erbsen and Nevin Erbsen of Lanark, Ill., were the highest placing individuals at the National FFA Dairy Cattle Evaluation and Management contest held in Indianapolis, Ind., in late October. Delana won the Jersey and Brown Swiss breeds, as well as earning the highest total score in oral reasons. They are members of the Eastland FFA chapter. Interestingly, a third cousin at from their family’s Erbacres Holsteins, Connor Erbsen, was the high individual in the 2017 national FFA contest.

Each student places six classes representing three breeds (Holstein, Brown Swiss, and Jersey), gives three sets of reasons (one per breed), and takes a written test, which includes evaluation of Dairy Herd Information (DHI) records. All of those items are calculated to generate a final individual score that determines the overall high individual.

Illinois FFA’s team members were Delana Erbsen, Nevin Erbsen, Alyssa Miller, and Ella Gunderson. They were coached by two dairy producers, Wendy Erbsen and Rob Gunderson. Their FFA advisor is Cindy Feltmeyer. All four Eastland FFA chapter members earned gold rankings. In 2019, a different Illinois chapter, Prairie Central, was the reserve champion team in the contest. The last time an Illinois chapter was national champion was in 2009 when the Prairie Central Chapter took the title.

Their coach, Wendy Erbsen, shared, “These students are outstanding. They’re all on the honor roll and student athletes. Each one of them does chores before they go to school. But the best thing about this team is they are so coachable and work hard to correct the items that need improvement.”

The second-place team was from Durant FFA in Florida, and all four members earned gold rankings. Team members were Austin Holcomb, Casey Lane, Caroline Haxton, and Savannah Rice. Florida FFA had two individuals in the top 10: Savannah Rice in fourth and Austin Holcomb in eight. They are coached by Chris Holcomb. Ironically, Wendy Erbsen was a graduate student at the University of Florida and was Chris Holcomb’s dairy judging coach when he was earning his Bachelor of Science degree in Gainsville. The two teams attended practices together the week before the competition in Indianapolis. 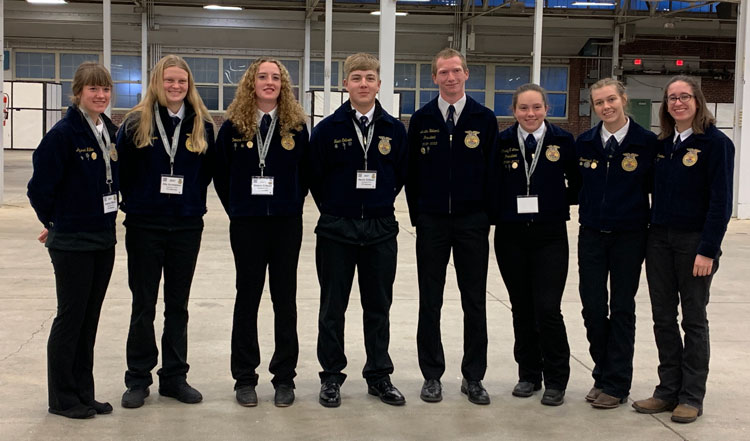 Maquoketa Valley FFA in Iowa placed third. Team members were Lane Domeyer, Courtney Goedken, Haley Ronnebaum, and Alia Domeyer. While they did not have a top 10 individual, they were balanced and all members earned gold.

The top three teams are invited on the International Dairy Judging Tour next summer in Europe. They will compete at the 2022 Royal Highland Show in Edinburgh, Scotland, and tour dairy operation in Scotland, Belgium, and Germany, as well as historic locations.

The group presentation score was not a factor in the contest this year and scores were not included. This team activity typically includes evaluating a farm and providing feedback in the form of an oral team presentation where all four youth discuss the farm’s recommended animal health protocols. Additionally, the written test was done remotely this year and was taken prior to the teams arriving in Indianapolis.