Quadruplets: a 1-in-180 million story

The birth of healthy twin heifer calves with a healthy mother cow is a gift on any dairy farm. Multiply that by two, and what do you get? 179,200,000. 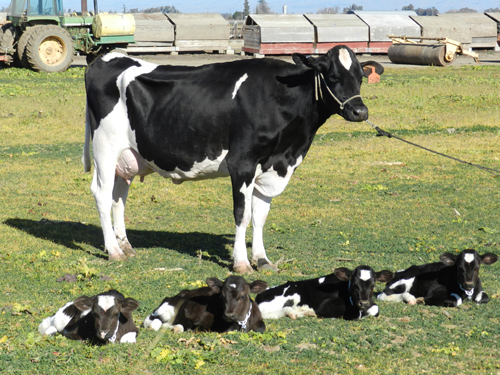 A normal day at Zuppan Dairy, Orland, Calif., includes the milking of cows, checking of the close-up pen, and everything else that goes on at all of our farms. Tuesday, December 6, 2011, was one for the record books. A 4-year-old cow, No. 5026, had quadruplet heifer calves. More impressive, all four are alive and well, and mom is doing just fine. Veterinarian Mike Karle estimates that the odds are 1 in 179.2 million.

John Zuppan, who owns the farm, knows that the story really started months ago. Cow 5026 was bred on a natural heat using nonsexed semen with Cole (1HO2571), a Toystory son. At ultrasound, they thought they had some really big twins, said John. They decided it would be best to dry her off a little sooner, three months instead of two. John thinks that is what made all the difference.

A great video is shown from a local television station:

At Zuppan Dairy, the close-up pen is located in a high-traffic area with people regularly walking by. John's son, Mark, saw that Cow 5026 had given birth to twins. After picking those two up, he came back and saw two more. At that point, they were 90 percent sure that they were all hers. No other cows showed signs of calving and none were due within four days of that day.

They asked Karle to send hair samples to the lab at UC-Davis, and all five animals were confirmed to be related. In an email to Hoard's Dairyman, Karle suspects that Cow 5026 released three oocytes from her ovaries and all three were fertilized. Then one of those split – producing two identical calves of the four. At a herd check this week, John Zuppan was surprised how "exceptional" she had cleaned.

Zuppan dairy has about 400 cows in northern California. Cow 5026's quadruplets were her third calving. The previous two were single-calf births.