Agriculture has been insulated from a down economy

Despite a sputtering economy, dairy should continue to benefit from robust demand. 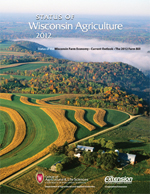 "Agriculture has been insulated from the forces battering the general economy. I expect that to continue in the coming year," says the University of Wisconsin Madison's economist Bruce Jones at the University's Agricultural Economic Outlook Forum. "A looming euro crisis could change that positive outlook," he says. "If there is a flight from the euro to the U.S. dollar, ag exports could fall," says Jones.

The favorable ag economy has improved bottom lines. "Since 2009, farmers are paying down more debt," says Jones. "Interest rates on operating loans have fallen from 2009's 6.17 percent to the 5.66 percent posted last year. We have enjoyed declining interest rates for two decades; that trend should continue," noted Jones.

What could we expect for input costs?

"Most farm input prices are expected to rise by only a small amount in 2012," predicts Jones. "Fertilizer prices have stabilized somewhat as supply has come closer to meeting expected demand. Meanwhile, the direction of fuel prices is highly uncertain due to political unrest in the Middle East," he says. "Lastly, land rents should continue its upward movement," estimates Jones.

"If the conditions are right, we could make a lot of milk in this country," suggests the University of Wisconsin's Mark Stephenson. "Cow numbers are now at their highest level since 2007 thanks in part to growing heifer inventories. Part of that is due to better animal care, while some is due to sexed semen.

"From a product standpoint, butter supplies have been short," says Stephenson. "But butter is coming back. Butter stocks have been growing due mainly to higher production because demand is still strong.

"Cheese is the opposite story. Stock levels were running high for some time and concerned many in the industry. Now, inventory growth is tapering off," says Stephenson. "Also, cheese export sales are picking up. For example, the U.S. provided about 45 percent of South Korea's cheese consumption last year," he said.

"Bottom line for dairy, 2012 prices will decline maybe $1.80 per hundredweight from 2011 levels," says Stephenson. "This drop will come after the highest annual milk price ever recorded," he said.

"Feed prices will remain high, and margins will be difficult for producers who buy most of their feed," he said.

"Overall, I see more upside potential in my forecast than downside," he says. "Worldwide, there is a shortage of animal proteins. If economies remain strong enough, people will want to upgrade their diets."

The University of Wisconsin's Brenda Boetel told attendees that the U.S. became a net-beef exporter for the first time this century in 2011. "Some of that is due to strong consumer demand. However, high cull cow prices are also a major reason the U.S. became a net exporter of beef last year," she noted. "In the past, the U.S. imported a lot of lean beef. Now, we are meeting our domestic market demand with more dairy cows going to market," says Boetel. "Beef prices should remain robust in 2012 and may even go up," she concluded.
Related