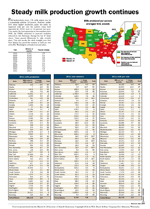 The twin combo of more milk per cow and a larger dairy herd pushed up milk production last year. When looking at the year-end statistics released by USDA, cow numbers went up 75,000-head or 0.8 percent while milk per cow rose 196 pounds or 0.9 percent. This is a sharp contrast to 2010 when national gains in milk production fell solely on improved milk per cow.
The 2011 national dairy herd stood at a yearly average of 9.194 million cows. This annual growth in cow numbers is the first expansion since 2008. The current dairy herd is even larger with the December 2011 estimate at 9.223 million, while January is 9.236 million. This is the largest dairy herd since May 2009.
Among the top 10 milk producing states, Texas passed Minnesota to take seventh place. This also marks the sixth straight year that New Mexico has paced the country in milk per cow at 24,854 pounds. Washington, at 23,727 pounds, is firmly in second place.
The article includes a chart which shows milk production per person. In calculating the number, we took July 2011 census data and divided it by each state's milk output. Nationally, each cow produced 631 pounds of milk for every American. Meanwhile, 2010 consumption data shows the average citizen consumed 616 pounds of milk. Much of the difference between the 631- and 616-pound estimates go to dairy exports.