The West Coast is swimming in milk

A number of dairy processors have implemented or reconfirmed delivery constraints.

By Hoard's Dairyman staff   @hoardsdairyman
U.S. milk production is heading up, up, and up with milk flow growing 2.5, 3.4, and 4.3 percent nationally in December, January, and February. That growth has been even greater in the western U.S. where a full year has passed since any state west of the Rockies has experienced a dip in milk production. And that dip was quite small when Utah fell a mere 0.7 percent when comparing February 2011 to the previous year. 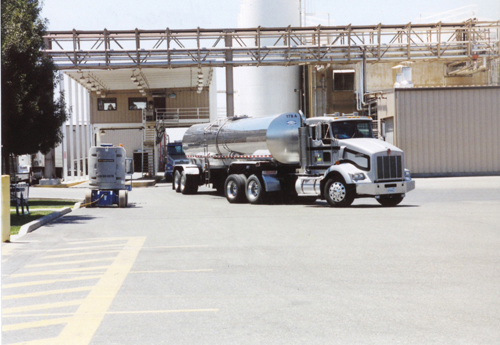 In reaction to mounting milk supplies, a number of West Coast processors are constricting the milk spigot because there simply isn't enough plant capacity. In the March 10, 2012, issue of Hoard's Dairyman, we reported that Northwest Dairy Association (NDA), the nation's fourth largest dairy cooperative, established a temporary production base for each cooperative member in Washington and Oregon. It will apply volume assessments to excess milk, and the initial program will run from April to August. The base was determined by each producer's highest monthly production in the previous three years.

NDA is not alone. Farmers Cooperative Creamery of McMinnville, Ore., has implemented a similar plan for its Pacific Northwest milk shippers. It recently updated each farm's base level and will enact a FCC Supply Management Program beginning April 1. There will be four tiers:
• Tier one is for monthly production up to the base level.
• Tier two is for production exceeding the base by up to 1.5 percent. It will result in an initial $3.50 per cwt. deduction on excess milk.
• Tier three is production growth from 1.6 to 10 percent over base, and it will have a $6 per cwt. surcharge.
• Tier four is for output over 10 percent of base. It will depend on market conditions and will begin with an initial deduction of $6 and it is subject to revisions.

The story is much the same in the nation's largest dairy state as California's heavy output is causing processors to do the same. Land O'Lakes (LOL) western division has called for at least a 6 percent reduction in production by April 1. Those shippers who produce above the newly revised base will face a minimum charge of $10 per cwt. on excess milk.

Additionally, all Tulare and southern California producers will have to reduce production by an additional 6 percent. The temporary plan is scheduled to sunset on June 30. In the meantime, a 30-cent-per cwt. bonus will be awarded to LOL producers who comply with the new plan.

Other Golden State processors haven't gone as far as LOL. However, Dairy Farmers of America (DFA), California Dairies, and Hilmar Cheese have all reminded producers that base plans remain active.

When it comes to DFA specifically, Gary Stueve, vice president of operations for DFA's Western Area says, "In recent months, extraordinary production volumes have created stress on milk plant capacity throughout California. A benefit of cooperative membership is that Dairy Farmers of America, Inc. (DFA) members can continue to be assured of a daily home for their milk production. In order to help manage the current in-state plant capacity limitations, DFA continues to explore alternatives for milk sales and has reminded members of the base production program in place to help manage milk marketing costs during extreme market conditions."