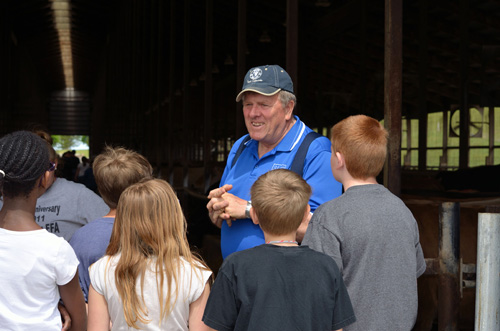 In a mere 6.5 hours, fourth grade students along with 120 parents, split into three shifts, were exposed to Wisconsin's agricultural industry while attending the fourth grade farm tour held in Jefferson, Wis. Students from 23 schools around the county visited Kutz Dairy, LLC., owned by Ron and Pam Kutz, along with their sons Aaron and Allan. 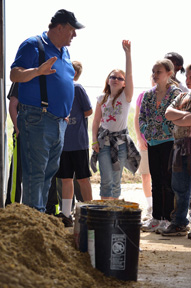 Walt Coussens, the event's organizer, kicked the tour off telling the students they're here because they are our future; someday, they will be our country's doctors and lawyers. He then added that from the time they wake up to when they go to sleep, they can't live a day without being impacted by agriculture. 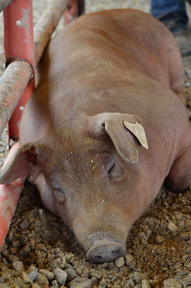 FFA students are heavily involved in the event from packing sack lunches for the younger children to leading groups around the dairy and even presenting at some of the 10 stations. Stations included: beef, pork, and sheep production, agricultural careers, milk house and dairy barn, soil conservation, crop production, calf raising, and equipment and technology. The Wisconsin State FFA Vice-President was also on hand to help throughout the day.

At each station, the FFA members have a list of key messages they present and hope the students retain. The favorite stations are often the most interactive ones. For example, when learning about crops and feeding, youth can try to lift hay bales. During lunch, students answer questions on slips of paper, which helps the planning committee gauge overall retention.

For most students, the day connects many of the concepts discusses in class. "For my students it finally clicked that chocolate milk isn't produced by brown cows," noted one teacher.

"Despite being from a fairly rural community, most of the students in our classes have no real connection to or understanding of agriculture and what it encompasses," noted another fourth grade teacher.

At the end of the day, teachers were sent home with packets of agricultural information to distribute to students in the hope that the conversation would continue at home.

The event, in its 19th year, is a combined effort between the Jefferson Agribusiness club, Frontier FS, Jefferson FFA, Fort Atkinson FFA, Jefferson County Farm Bureau, and Jefferson Ag In The Classroom.
Related