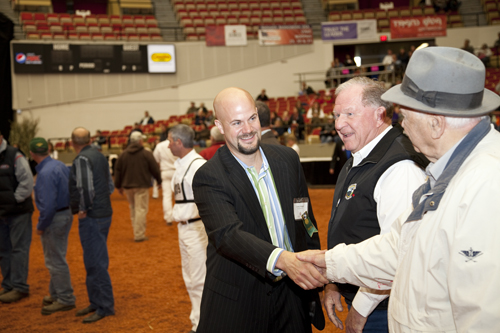 Corey Geiger, Mukwonago, Wis., was named the 14th Honorary Member of the Klussendorf Association. Since the association was formed in 1937, 13 other men have received special recognition by the membership for their involvement with the purebred dairy cattle.

Geiger has shared his talents with a number of dairy-based organizations including his service as the third secretary-treasurer of the Klussendorf Association for the past eleven years. Geiger became a full-time member of Hoard's Dairyman's editorial staff seven months before graduating from the University of Wisconsin-Madison with dual degrees in dairy science and agriculture economics. Since then, he has traveled to 45 states, five Canadian provinces, Mexico, Australia, New Zealand and Germany to cover the dairy industry. Recently, he was named assistant managing editor of the publication with subscribers in 68 countries which also has Japanese and Spanish editions. A friend to all breeds, he also coordinates and selects cattle for the popular Hoard's Dairyman Cow Judging Contest which is entering its 83rd competition.

As a valued contributor to our industry, he spent eight years as superintendent of contest officials at the National 4-H Contest and now serves as superintendent of the Intercollegiate Dairy Cattle Judging Contest. Respected by his peers, Geiger served as president of the National Dairy Shrine and was twice elected president of the Wisconsin Holstein Association and was instrumental in developing Midwest Holsteins, a joint publication between Iowa, Illinois, Minnesota, South Dakota, and Wisconsin's state Holstein associations. Today, he represents breeders as a director on the National Holstein Association board of directors.
In 2010, Geiger was named a "Friend" of World Dairy Expo, and in 2008, he was recognized as the top young agricultural journalist by the American Agricultural Editors Association. That same year he won Alpha Gamma Rho's Grand President Award given to its top four members under 40 years of age.

This year's 14th honorary winner remains active in his family's Ran-Rose Holstein herd in Reedsville, Wis. He has mated the herd since he was a teenager and it is now an eleven-time Progressive Genetics Herd Award recipient by Holstein Association USA. He has bred two 93-point cows, two that have produced over 340,000 pounds of lifetime production, and has co-bred and owned the 2004 High Honorable Mention All American Holstein Summer Yearling. The family operation dates back to 1867 and consists of nearly 400 acres.


Return to Hoard's at Expo
Related