The Minnesota wins both college and 4-H; Cobleskill tops the post-secondary contest at NAILE.

By Corey Geiger, Managing Editor
There were 45 teams that competed in three dairy judging contests held on November 4, 2012, at the North American International Livestock Show in Louisville, Ky. When the results were read Monday morning, only seven total points separated the first- and second-place teams in all three contests - one point each in the 4-H and post-secondary division and five points in the college division.

In addition to be the slimmest of margins separating the contests, the scores ran quite high. All three contests judged the same 10 contest classes: two each in the Ayrshire, Brown Swiss, Guernsey, Holstein and Jersey. The University of Minnesota had the best performance with a 46.8 point average on 30 placings and 15 sets of reasons (totaled as a team). Meanwhile, the winning post-secondary and 4-H teams yielded a 46.4 average.

Not only did the Les Hansen coached team take home top honors, they also boosted the high individual, Isaac Salfer, who averaged 47.3 on 10 placings and five sets of reasons. In second with a score of 708 was Chanse Huggins from the University of Florida who helped pace his team to a second-place finish. Chanse also had a top 10 finish at World Dairy Expo in October. Florida had a score of 2,102, five points behind Minnesota. After that, 41 points separated second from third. Minnesota and Florida had exactly half of the top 14 individuals. The college contest had 20 teams. Shown in the photo is Les Hansen with his winning team (L to R): Doug Petzel, Isaac Salfer, Jon Schmidt and Tyler Otte. 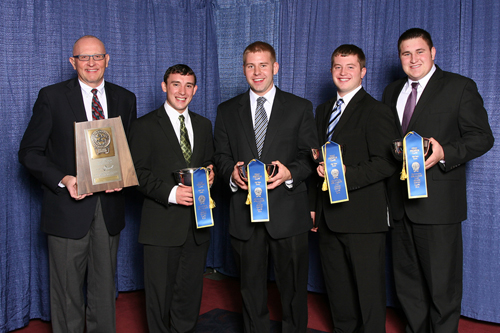 In the 4-H Contest, it was Minnesota's 4-H team that bested their neighbors to the east, Wisconsin, by one point: 1,809 versus 1,808 in team points. Then 17 points separated second and third. The Minnesota team was led by the contest's high individual, Michael Schmidt, who averaged a 48.1 on 10 placings and three sets of reasons. He outpaced Wisconsin's Ethan Dado by 12 points. In third was Minnesota's Nathan Donnay. Wisconsin's Laura Jenson was in fifth. A week earlier, Dado and Jensen were both members of the National FFA's second-place team representing Wisconsin at the national contest. In all, the 4-H Contest had 19 teams. The winning team coached by Karen Anderson includes (L to R): Michael Schmidt, Justin Siewert, Nathan Donnay and Christine Leonard. 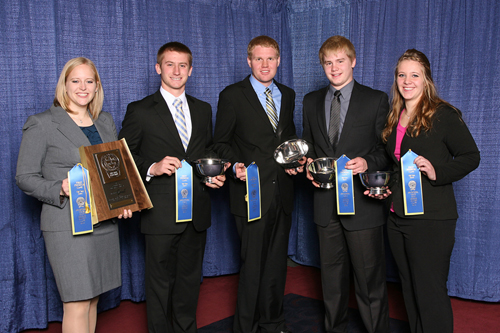 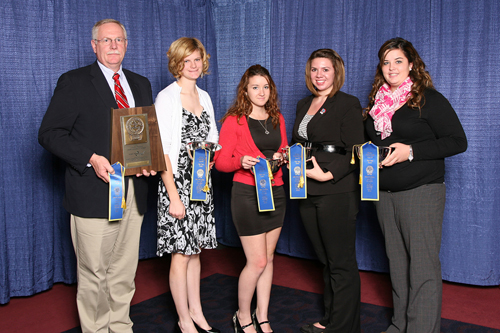