For best returns, make sure one person can manage robots.

As we wrap-up our 62nd Round Table series, "Robots milk our herds," the four herds featured in our February 25 issue share advise for others considering robots. To read the entire Round Table, click here. 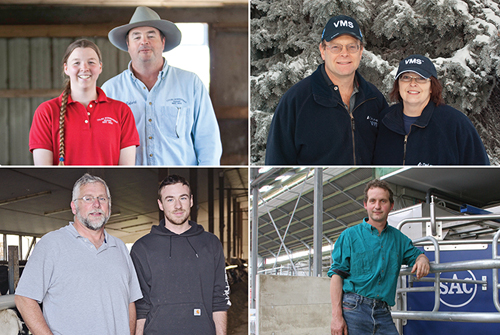 What would you have done differently?

Colby (Spencerport, N.Y.): We consider ourselves lucky that there isn't much we would change if we could start all over again. We would probably install a few more rails on the free stalls that have alleys on both sides to prevent small/obnoxious cows from walking through them instead of entering the fetch pen during the training period.

There are a couple of big points we would recommend to farmers making plans for milking robots:

a. Take the time to draw out multiple variations of barn layouts, and visit farms that use different barn plans, both for new barns and retrofits. Consider the different layouts not only from the point of view of getting cows into the robot, but also how you will treat a cow, dry her off, breed and pregnancy check her, move her into the milk herd from freshening and so forth.

b. When you're considering the above, make sure you can do all those things using just ONE person. If you need two people to easily bring a cow up to the robot or get her separate for breeding or drying off, you will minimize labor savings.

c. Gates are your friend. A one-way gate or a gate hanging on the wall in a critical cow movement spot like a crossover alley can save you a whole extra person's salary. Spend the time considering different gate placements when you're sketching out possible barn layouts.

d. We have come to believe that one robot per one pen of cows is the best layout from an ease-of-management issue, particularly when it comes to moving individual cows.

e. We also believe that free-flow cow movement systems with a simple fetch pen are better for cows and less frustrating for farmers. In our experience, we haven't lost any efficiencies using it either.

Hammer (Leduc, Alberta, Canada): If I would have started over again, I might have planned a layout for a possible expansion for another unit. Also, so much more information and experiences have been compiled and is now available to help make better decisions. Don't be afraid of it, this technology really works.

Kappers (Ingersol, Ontario, Canada): In my view, optimizing feed to ensure active cow traffic is critical. We feed our cows primarily with grass and corn silage which enhances their natural desire for the food pellets offered in the AMS. Cows that are fed primarily on grain corn tend to be less active and, as a result, frequent the AMS less often.

Meuwissen (Mariahoop, The Netherlands): The robots have made it possible for me to manage a lot more cows without hired help, and that has been a real plus. I think the layout of my barn with good options for cow handling has contributed to greater labor efficiency.

Keeping it a one-man operation was probably a good decision, but perhaps 275 cows is a little bigger than what I would plan for if I were doing it over again. My main advice to others would be to pay attention to detail in barn layout and invest in space for handling and special needs.

Colby: Not all cow udders work well with the robots. Most cows can be milked on them, and the newer models are better at it, but poor udder confirmation will result in more failures. The biggest issues are udders that hang too low, teats that are too close together and rear teats that are much higher than the front teats such that they're blocked by the front quarters of the udder.

Patience is required for the first one to three weeks of training. Be kind as your cows are learning because upsetting them slows the learning process. Similarly, one bad experience in the robot (getting trapped in the box for a long time, getting badly beat up by a boss cow in the fetch pen) usually requires you to retrain the cow because she will want to avoid having it happen again.

Grain MUST be available at all times in the robot. The cows will notice the difference in the sound (they listen to grain falling from the auger) and will stop coming up to the robot if they don't hear it.

You will second-guess the decision to switch to robots constantly for the first three months of transition, but then the hiccups will start to smooth out and the cows will get used to coming up to the robot individually, and you will start to see the benefits. This is when you need to leave the barn because you can detrain them by fetching too much.

As Robert puts it: When installing a new robot milking system, "it takes 21 days to train the cows and six months to train the farmer."

Hammer: Having an automatic milking system does not mean you can go away for a few days and leave the robot in charge, but it does give you flexibility in your day. In order for your automatic milking system to be successful, management is most important in how you interpret and respond to all the information given to you through the VMS. Having a good relationship with your dealer and getting good support and service is very important.

Kappers: Carefully choose the AMS system that is right for your needs, and start with a manageable herd size.

Meuwissen: I think that robotic milking is an excellent choice for family-run dairies milking 150 to 300 cows, especially if there are teenage children to share some of the labor and management. Below this size range, it would be a great option as well, but the capital investment may be too high. Above 300 cows, a parlor and hired help might be a logical alternative.
Related

The odds mean nothing
By Hoard's Dairyman staff