Dairy farmer is the preferred name

Informal survey looked at those who are involved in dairy production.

By Patti Hurtgen, Online Media Manager
After presenting various terms to describe those that work with dairy cattle everyday, we have the results of our survey, mentioned in our blog a few weeks ago. In total, there were 97 respondents.

Men in dairy production were most comfortable with the terms "dairyman" (26.9 percent), "farmer" (19 percent) and "dairy producer" (11.5 percent). However, when only allowed to choose one, they preferred "dairy farmer" by 42.3 percent. When given all options, over half of those surveyed chose any of the above choices. "Farm operator" was only accepted by 18.4 percent. Dairy farmer gives a more specific term than just farmer and it seems like a warmer, more personal word than dairy producer. 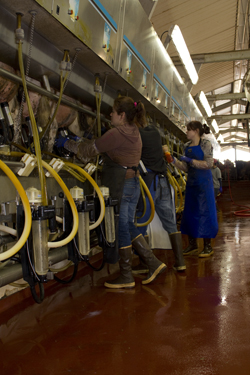 Women in dairy production preferred to be called "dairy farmers" by a 64.4 percent vote. They also preferred, but to a much lesser degree, "farmer" (15.6 percent), "dairy producer" (8.9 percent) and "dairy woman" (6.7 percent). The option of dairyman and farm operator had one vote each. While "dairy woman" was quite low for preferred naming, half of the respondents were comfortable with the term. In a follow-up question, women noted they would be comfortable being called a dairy farmer which led the way with 78.3 percent, yet dairy producer gained momentum here with over 65 percent of women stating they would be comfortable with that terminology.

However, allied industry gave more support to "dairy producer" for men with 57.1 percent usage, yet "dairy farmer" got the highest marks for women at 63.2 percent. For women, farmer and dairy producer followed with 57.9 percent and 52.6 percent, respectively. It may be a way to be more inclusive to both men and women clients and customers. Many of them farm and dairy, while others choose to focus on cow care and leave the crop work to others. This could have been their justification for giving dairy producer the highest scores as compared to female and males in their business.

But the real test may be what the consumer calls us. "Farm operator" got low marks throughout the survey. Probably because the visual of a farm operator is difficult for the average consumer, but dairy farmer or farmer conjures up a vivid image. "Dairy farmer" was the highest recognized at 88.2 percent. Consumers could vote for more than one option, so other options were farmer (52.9 percent), dairyman (47.1 percent), dairy producer (35.3 percent) and farm operator at a mere 5.9 percent.

Dairy people want to be known as dairy farmers and that is how consumers recognize us. So, if the opportunity presents itself to address the media in person or in print, you might consider using dairy farmer to better connect with your consumer.
Related

A showring recap from a 4-year-old
HD Notebook
Related to:
HDN, farm life
In HD Notebook