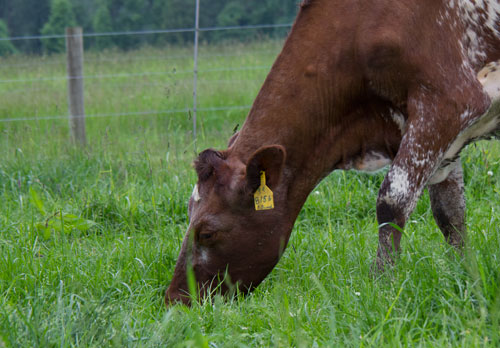 With a comparison between organic operations and conventional high-grain herds, Washington State University researcher Charles Benbrook concluded that whole milk from organic dairies contains far more of some of the fatty acids that contribute to a healthy heart.

The study notes that "Milk from cows consuming significant amounts of grass and legume-based forages contains higher concentrations of omega-3 fatty acids and CLA than milk from cows lacking routine access to pasture."

While this statement rings true, organic cows aren't the only ones on pasture. The same benefits are seen in milk from conventionally raised cows that consume a grass-based diet. Even within organic dairies, these benefits begin to diminish when cows are supplemented with grain.

The higher levels of CLA seen in the study are from pasture-based feeding programs. Any cows consuming high levels of lush pasture will secrete the desired CLA content. Feeding a high-forage diet with pasture as the main forage source could be a plus, too.

Additionally, there is substantial seasonal variation in pasture-based CLA levels. There were negligible differences during the winter months between organic and conventional milk when cows were no longer on pasture. Organic milk from Midwestern or New England herds in the winter would not have the higher CLA levels the study touts.

The work also bucks the current trend to consume low or nonfat fluid milk. The health benefits of elevated organic milk consumption are only realized when consumers purchase full-fat dairy products. The consumer must consume full-fat milk as the CLA is in the fat fraction.

Within the study, the authors note that "Because both conventional and organic dairy fat have omega-6 to omega-3 ratios superior to most other fat sources in typical Western diets, replacing nondairy fat with full-fat dairy products, whether conventional or organic, will improve total dietary LA/ALA ratios."

The full study can be found here.

To comment, email your remarks to intel@hoards.com.
Subscribe to Hoard's Dairyman Intel by clicking the button below
Related

Can we get to the source of the PPD problem?
Hoard's Dairyman Intel

Can we get to the source of the PPD problem?
By Hoard's Dairyman staff