Why the Yakima lawsuits matter to every producer

Lawsuits are underway against four Yakima, Wash., dairy families that, if successful, will set an environmental precedent that potentially threatens the existence of every farm - dairy or otherwise - in the U.S. 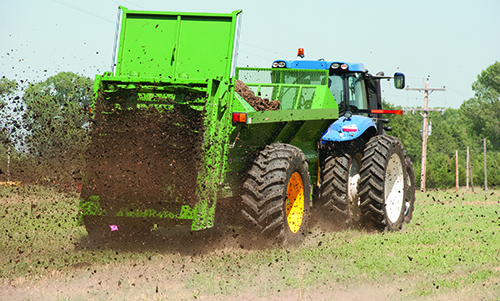 How nitrates from manure move through the soil profile and into groundwater is the heart of the Yakima lawsuits
Admittedly, "every farm" being affected by the outcome of lawsuits in one region is a doomsday scenario that is unlikely to occur. Still, all possibilities have to be considered in today's legal world. However, the mere fact these lawsuits are happening at all screams two loud warnings to dairy producers.

First, it is essential that only solid-gold, best management practices be used when dealing with fertilizer and wastewater. Second, the relentless scrutiny by environmental activist groups of both farming practices and environmental law definitions may never end. As bad as things are now, expect them to get worse.

The lawsuits are taking place in Yakima, Wash., a rich agricultural area in the south-central part of the state. They have a long and complex backstory and are based upon what has been described as terrible science.

The gist of the situation is, the Environmental Protection Agency (EPA) came to Washington in 2010 in what the state's producer group believes was another attempt to expand the agency's emergency regulatory power under the federal Safe Drinking Water Act. Previous attempts in North Carolina and Texas had failed. Washington, however, is under jurisdiction of the 9th Circuit Court in San Francisco, which is widely regarded as the most pro-environmental court in the country.

A terrible choice
EPA then bullied 11 Yakima dairies to let it do water quality tests for nitrates. In 2012, five were singled out and given an awful choice: sign a consent decree to install monitoring wells and collect samples for eight years to determine if there is a water quality problem, how bad it is and where it's coming from . . . or try to convince the 9th Circuit Court that EPA doesn't have the authority to make such demands.

Losing would have established a precedent that EPA could use to set national policy for every farm in the country, so three of the families that owned four of the dairies signed the consent decree, installed monitoring wells and are now collecting samples. The fourth family sold its cows in May and went out of business.

"Those four families basically sucked it up and took one for every farmer in the country," says Jay Gordon, executive director of the Washington State Dairy Federation (WSDF). "They were the unlucky ones that EPA needed to hang from the yardarm, point a finger at and say, Your honor, they are guilty, and they are why we need the power to come in and tell farmers what to do.'"

Targeting manure, not nitrogen
EPA was now more or less out of the picture. But in February 2013, two environmental activist groups filed individual lawsuits against the five dairies for nitrogen pollution of groundwater, alleging violation of the federal Resource Conservation and Recovery Act (RCRA) that regulates solid and hazardous waste disposal, including nuclear waste.

When RCRA was passed, Congress gave manure an exemption. But the environmental groups' lawsuits are focusing on nitrogen, which results from manure. They claim the dairies violated RCRA by "dumping" - their term for any application whatsoever - manure or fertilizer in any form on fields, because it may result in excess nitrogen migrating below the root zone of plants and into groundwater.

The environmental groups are making two claims: One, that manure should not be exempt from the law. Two, that the five dairies have broken the law.

Medical science long ago determined that adverse human effects from excess nitrogen begin to occur at about 100 parts per million (ppm). To provide a huge buffer for human safety, U.S. standards for drinking water are set at a 10-fold safety margin of 10 ppm. Under RCRA, nitrogen pollution of groundwater occurs above 10 ppm.

Each dairy's lawsuit will be heard in Yakima Federal District Court by the same judge; one per month starting in mid-September 2014. Regulatory precedent will be set if just one of them loses.

Gordon emphasizes that every dairy and every farm in the U.S. should be worried about the outcome of the cases.

"Nitrogen is nitrogen, whether it's manure or anhydrous or urea or sulfate. If the families lose, then there is no farm that couldn't potentially be subject to a claim that they are dumping nitrogen in violation of federal RCRA law and are subject to EPA regulation and citizens' lawsuits.

"There is no possible way that some nitrogen won't get below the root zone sometime, despite farmers' best plans and intentions," he adds. "It is not physically possible for farmers to prevent that from happening every day of the week, 365 days per year."
The big question dairy farmers may ask is, could such a draconian interpretation of RCRA really happen?

"The answer to that is found in the judge's ruling in July," says Gordon. "The families' attorneys told him that federal courts have been asked four times to rule on this, that as a matter of law Congress did not intend for RCRA to apply to solid manure, and that no federal judge has ever ruled the law applies to manure.

"The judge turned to the activists' lawyer and asked if that was true. He replied that one almost did. The judge then repeated his question and the lawyer answered, No, your honor, no court has ever ruled that. You get to be the first; these people are killing America.'"
Legal, financial and scientific support for the Yakima dairies continues to come from WSDF, Idaho Dairymen's Association (IDA), Washington dairy cooperatives, and individuals and organizations around the country. But getting the word out about the lawsuits and their potential consequences has been slow, especially outside of the dairy industry.

"In my opinion, just like EPA made the Chesapeake Bay a model for surface water discharges that it will use elsewhere, EPA is now trying to establish a model for groundwater," says Bob Naerebout, IDA executive director. "In this specific case, all livestock industries should be concerned about what this means to them. And row croppers' heads had better be up and looking, because after EPA is done perfecting the model on livestock industries I think the row crop model will be right behind it."

There is a strong case
Gordon has high confidence that the dairies will win. First, because "these are really, really good farms and really, really good operators." Second, because the EPA data that the environmental groups' suits are based upon - Gordon dislikes calling it science - is apparently awful.

"That science is going to be widely challenged, and in fact it already has been," he explains. "USDA submitted comments to EPA last year and said, Your science is so bad you need to retract it.'" EPA said it wouldn't.

"I'll guarantee that our side is going to submit testimony about the 38 individual scientists, associations, organizations and agencies that submitted comments to EPA saying its science is so bad it needs to be done over," says Gordon.

"In addition, there were only two external peer reviewers of EPA's science. One was a person with the U.S. Geological Survey who ripped the heck out of it. EPA ignored it. The other was a USDA Agricultural Research Service scientist who sent a letter to EPA asking that his name be removed as a reviewer after he found out they had omitted 40 pages of his document, including his conclusions."


This article appears on page 7 of the January 10, 2014 issue of Hoard's Dairyman.
Related

Pick an effective inoculant for your silage
Crops and Forages
Related to:
features, manure, environment
In Features