Hypocalcemia is more than a “low calcium” problem

Milk fever cannot be overcome in a reactive fashion. Prevention programs must be in place to help cows successfully transition into lactation.

By J.A. Shire And   D.K. Beede
The authors are a graduate research assistant and professor in the department of animal science at Michigan State University, respectively. 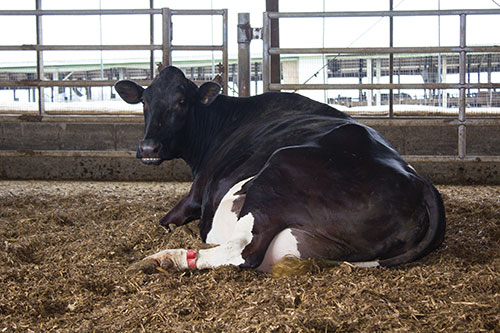 To better control subclinical hypocalcemia, producers should consider using a higher blood calcium threshold to identify cows at risk. Managing the problem with the aid of a negative DCAD diet can lessen losses from reduced milk production, disease and impaired reproduction.
While hypocalcemia is not always at the forefront of producers' minds, it should be. A study conducted by the USDA National Animal Health Monitoring System (2002) estimated a 25 percent incidence rate of subclinical hypocalcemia in first-lactation cows. An incidence rate greater than 50 percent was seen in third and greater lactation cows in the United States. Correspondingly, the incidence of clinical hypocalcemia ("milk fever") rises with lactation number, afflicting around 1 percent of heifers and more than 6 percent of third and greater lactation cows.

The current U.S. rate is estimated at 5 percent. This is a much higher incidence rate of hypocalcemia than many producers suspect, especially in the heifer category. Typically, heifers respond more quickly and efficiently to the calcium demands at the onset of lactation and, thus, are thought to be less afflicted by the disorder. This raises the concern that hypocalcemia could have a larger impact on the success of herds than previously realized.

A "new" threshold
Sure enough, recent findings suggest that subclinical hypocalcemia has a more detrimental effect on milk production, transition health and immunity than previously considered. Unfortunately, farms cannot successfully manage hypocalcemia in a reactive fashion as the repercussions of the disorder have already transpired. Hypocalcemia prevention programs must be in place to successfully transition cows into lactation as well as ensure that these cows have subsequent satisfactory reproductive performance.

Traditionally, a blood calcium concentration below 8.0 mg/dl is recognized as subclinical hypocalcemia, with milk fever defined as a decline in calcium to which there is a loss of homeostatic function. Cows with milk fever show the classic signs of staggering, cold ears and lying in a tucked head position. Recent evidence suggests the use of a higher cutoff around 8.5 mg/dl is a better target for cows at risk for secondary health disorders and to avoid possible losses in milk production.

During the transition period, there is a dramatic shift in biological processes, and the demand for calcium is doubled with the onset of lactation. Calcium is a major cellular signal needed for a range of biological functions, and the heightened risk of secondary health disorders postpartum is thought to be linked to the imbalance of calcium at this time. Most obvious is the association of calcium with muscle contraction. Cows experiencing hypocalcemia often have lowered gut motility and, thus, decreased feed intake. Consequently, the risk of displaced abomasum rises.

Lower intakes also put the cow in a greater energy imbalance and raise the risk of ketosis. If energy requirements are not met by the cow, as is often the case, nonesterified fatty acids (NEFA) are released from body stores. These NEFA are converted to ketones, such as ß-hydroxybutyrate (BHBA). Cows that develop hypocalcemia have greater BHBA concentrations than their counterparts with normal calcium levels. Another harmful side effect of greater blood NEFA concentrations includes elevated liver triglyceride accumulation or "fatty liver."

Impairs future productivity
Economic losses from hypocalcemia can come in a variety of forms. In the USDA (2007) survey, approximately 26 percent of cows in the U.S. were culled for poor reproductive performance. Through better control of periparturient calcium status, subsequent reproductive management and success might be improved. Pregnancy rates may be improved if cows transition without developing hypocalcemia and clinical increases in NEFA or BHBA. Cows that experience common parturition problems are known to have reduced normal estrous cyclicity. Though calcium status is not thought to play a direct role in cyclicity, cows with hypocalcemia do have weakened biological systems that could perpetuate further health conditions that impact pregnancy rates.

Calcium is also an important second messenger in immune responses. Accordingly, the cow's ability to combat infections declines once in a hypocalcemic state. Mastitis incidence rises following hypocalcemic states due to the insufficient calcium levels needed to activate immune responses and muscle contractions for teat closure. Incidence of metritis is also shown to go up. As much as a four-fold incidence rate increase has been documented for cows that display both birthing difficulties and subclinical hypocalcemia.

Additionally, the likelihood of culling rises as health or reproductive performance worsens. With this comes milk production losses. While milk yields early on and throughout lactation are not always negatively impacted by hypocalcemia, milk loss has been shown to exceed 5 pounds per day as a result of subclinical hypocalcemia. This number can grow as hypocalcemia progresses throughout lactation and further losses can come from the onset of ketosis.

DCAD diets can help
A tried and true method for effectively managing periparturient hypocalcemia has been through the use of a prepartum diet with a negative dietary cation-anion difference (DCAD). By excluding sodium and potassium (cations) and including more chloride and sulfate (anions), the DCAD becomes more negative. This helps the cow to prepare for parturition and mobilization of calcium stores.

Diets can become more "anionic" through the use of anionic salts or through commercial products; the latter of which has become more popular due to their often higher protein content and apparently more palatable taste compared to the salts. Foremost, rations should be built to lower the background potassium and sodium content before supplementary anion products are added. Although three days of provision is sufficient enough time to biologically prep the cows, a negative DCAD diet is typically provided to the entire close-up group throughout the three week close-up period for ease of management. At this time, no negative impacts of providing a negative DCAD diet to heifers has been observed. Current recommendations are to provide a DCAD of -10 mEq/100 grams during this time.

Hypocalcemia without a doubt is a detrimental disorder that affects periparturient health and lactational and reproductive performance of too many dairy cows. Tailored management programs must be in place to successfully transition cows.