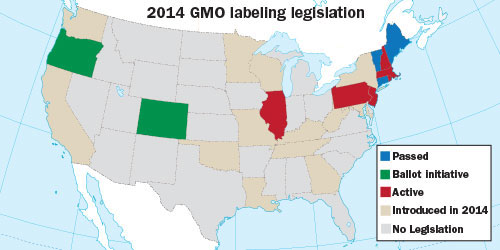 Vermont is embroiled in a food industry lawsuit after passing a GMO (genetically modified organism) labeling requirement earlier this year. Yet, this move by the Green Mountain State set the stage for just under two dozen other states to follow on its heels.

The push to mandate that companies label food products that are genetically modified or contain GMO ingredients has spread like wildfire. This year alone, 35 bills were introduced in 20 states on the issue.

Ballot initiatives are currently underway in Colorado and Oregon, noted the Wall Street Journal. In both states, the item will likely come up for public vote in November. Vermont's East Coast neighbors, Maine and Connecticut already have similar laws on their books.

A number of polls have shown that over 90 percent of Americans would prefer GMO foods be labeled as such, the Wall Street Journal added. This preference, note consumer advocacy groups, stems from a desire for transparency and informed decision making.