Paris, a 16-year-old Brown Swiss, has set a new record for lifetime pounds of protein and fat produced by a cow in the United States.

By Maggie Gilles, Kansas dairy farmer
There is a lot of black and white at Henry Dairy Farms, but a quick glance around the barn might reveal a glimpse of Paris, the only Brown Swiss cow on the 450-head operation. Although outnumbered in color, Paris has held her own in the milking parlor. 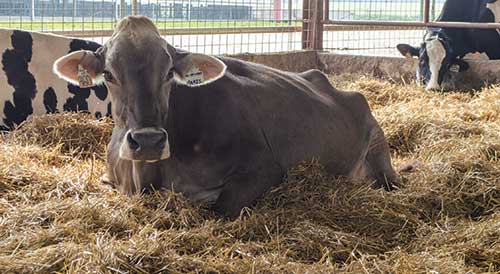 Those numbers place her in a class all her own in the Brown Swiss breed. She outpaces the second-highest producing Brown Swiss by more than 63,000 pounds of milk. In fat and protein, she leads by 1,355 pounds and 2,180 pounds, respectively. Even more remarkably, the Excellent 92 point cow milked her last 230,000 pounds with no assistance from BST.

In fact, Paris' numbers are notable enough to list her at the top of another impressive field of high-producing cattle. Her 32,969 pounds of combined fat and protein mark her as the leader in this category in the United States. She outpaces the leading Holstein by more than 2,000 pounds and the leading Jersey by more than 4,000 pounds according to the breed associations' official records. Paris' 431,001 pounds of milk leaves her only 27,615 pounds behind Koepke K0017229-1660, known to many as "Granny," the U.S. milk production record holder based on official breed records.

Stick with the routine 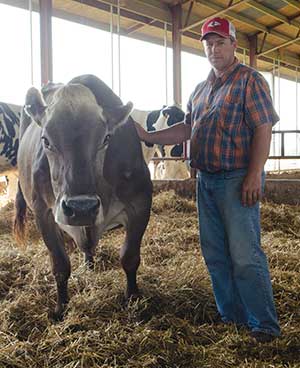 Paris is owned by Henry Dairy Farms of West Liberty, Ohio, in partnership with Wayne Sliker of St. Paris, Ohio. A few years ago, Paris was being housed at Sliker's while embryo work was completed. One evening, a strong windstorm passed through the area causing significant damage to several structures including the barn housing Paris. Sliker went out to the barns after the storm had passed and found Paris unharmed and happily eating at the bunk, as if nothing had happened.

It is this type of cow that most often sets production records like those of Paris'. According to Sliker, she is calm, cool, collected and tough just going about her business and not drawing attention to herself.

Mark Henry said Paris thrives on the routine of the farm, arriving in the milk parlor first every day and spending long hours at the bunk. He said Paris is one of those cows that just does not have problems.

"She just really likes to milk," Henry said. "We trim her feet once a year, never have to treat her and have never had an issue with her."

Production's no fluke
Paris was not born at Henry Farms, and Henry was not really looking to buy a Brown Swiss when his nephew attended the 2002 Midwest Revue. However, that is what he got, and Paris has not looked back since. Henry Farms purchased Paris as a dry cow before she began her third lactation. At the time, her records were nothing special but, under the care of Henry Farms, that changed.

With a rolling herd average of 27,430 pounds of milk, 1,132 pounds of fat and 847 pounds of protein, Henry Farms is no stranger to high-producing cows. Henry said they have had more than 10 cows reach the 300,000 pound mark at the dairy.

No doubt, the success of Paris and her herdmates has something to do with the care they receive at Henry Farms. The average age of a cow on the operation is more than 3 years old, and they have several cows living to be more than 10 years of age. The herd does some culling, but Henry said he focuses on cow longevity to maximize milk production.

"Our 3- and 4-year-old cows give so much more milk than the 2-year-olds, and we try to capitalize on that," Henry said.

Henry and his son, Jerrod, focus on cow comfort and health to enhance cow longevity on the third-generation dairy. They provide adequate fans in the barns and use mattresses and waterbeds in the stalls. They also try to keep calving intervals low using activity monitors to detect heats. They average a 13.4 month calving interval and calve heifers in at an average age of 1 year and 10 months. Another key for Henry to keeping his high-producing cows around has been hiring employees who are calm and know how to handle the cows.

Keep on milking
Henry and Sliker plan to continue milking Paris. More than three years into her lactation, she is still producing 50 pounds of milk per day.

"She could have another calf, but we are hoping to do some IVF work with her for now," Henry said. So for now, Paris will continue to wade through the sea of black and white minding her own business and leaving a mark on the Brown Swiss breed that will more than likely stand for many years.

This article appears on page 534 of the August 25, 2014 issue of Hoard's Dairyman.
Related

Editorial: The father of the fiber revolution
Features

Don’t power through a concussion
Features

Cows have a way of talking to us
Features

Don’t power through a concussion