Partners since the beginning 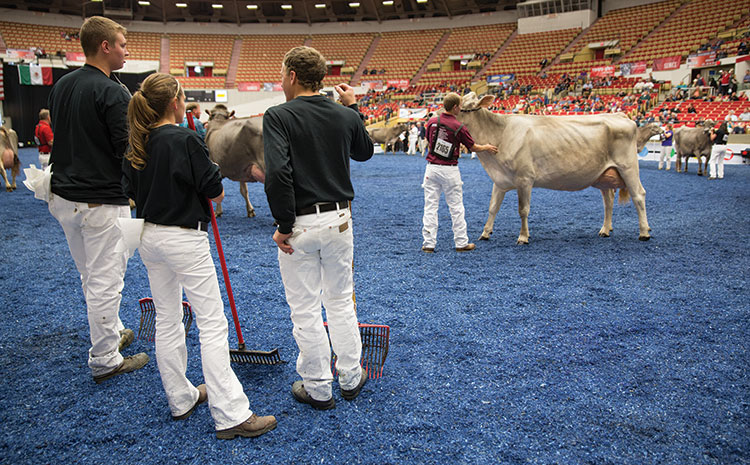 The Badger Dairy Club’s involvement in Expo has certainly evolved over the years. Today, you can find them working in the ring, in the cheese stand, and all across the grounds logging more than 5,000 hours throughout the week.

There are many individuals and organizations that have been instrumental in orchestrating successful World Dairy Expo shows throughout the past 50 years. One of the most notable is the Badger Dairy Club (BDC), whose members have worked behind the scenes of the incredible show since 1971.

An initial agreement that began out of the show’s need for assistance and the desire to raise funds for a fledging club has grown exponentially into structured roles and unprecedented networking opportunities for BDC members. In this article, several founding members of BDC, a past BDC World Dairy Expo (WDE) chairman, and the current chairman share their experiences and memories.

When the BDC planted its organizational roots in the spring of 1970, it was comprised of many talented young members with the drive to help the club succeed. One of those founding members was Dale Kranz of Columbus, Wis.

“Dairy Science Professor David Dickson had a vision to start a campus club for those interested in dairy, and when our class arrived, he guided us in pursuing that goal and founding the Badger Dairy Club,” Kranz said. “We knew we had to raise funds, so we utilized the talents of our members and offered a fitting service for herd classification and other farm events where members traveled to various herds and then donated a portion of their earnings back to the BDC treasury.”

Little did they know at the time, the members offering those services opened many doors for the future of the club and its membership. Another of the founding members, David Selner, the current executive director of the National Dairy Shrine and a freelance geneticist, also remembers the role the fitting service played in providing start-up funds for the club.

However, in 1971, Selner recalls a more momentous relationship formed. Dr. Dickson, Jim Crowley Sr., and Allen Hetts, father of BDC founding member Roy Hetts, were instrumental in initiating an agreement that would impact the club dramatically.

A small, but driven workforce

“A few years prior to 1971, dairy science graduate students were assisting on the grounds with nightline, but Dr. Dickson, Jim Crowley Sr., and Allen Hetts saw an opportunity for a win-win situation for World Dairy Expo and the BDC,” Selner recalled. “Namely, they approached Bev Craig, the first executive director of the rebranded WDE, and proposed an agreement between the two organizations offering the assistance of BDC members to the World Dairy Expo staff for the week of the show in exchange for compensation. From there, the partnership blossomed.”

Selner added that some of the first responsibilities for the 30-member BDC included nightline for exhibitors, running the milk house, setting up panels in the barns prior to the show, and grounds maintenance and cleanup. A few years later, showring assembly and assistance was added to that list.

Louis Prange, international marketing manager with Sexing Technologies and another founding BDC member, also reflected on those first years. “Allen Hetts was working with Bev Craig on developing the show, and Roy made the connection to bring the club and World Dairy Expo together,” he said.

“The agreement was really born out of necessity, as we needed money and they needed workers. We assisted with everything from putting down shavings in the ring, to setting up chairs for the World Classic Sale, to handing out ribbons for the shows.”

One of Prange’s most vivid memories was unloading an airplane full of cattle that had come for the show. In fact, a picture of that particular event still hangs on his office wall today. He also remembered the club was hired by Paclamar Farms to unload their railroad car of supplies.

For Prange, these experiences were some of the most beneficial for him as he graduated and moved on in his career, where he worked in international relations for the Holstein Friesian Association. While in that role, he got to fly the last load of the Paclamar herd to their new home in Italy.

“At the time, we had no idea of the side benefits for the club and for its members personally,” Prange said. “It gave the club great exposure, allowed us to make valuable connections, and meet some of the most influential industry leaders of the time. It was truly a thrill that developed into an appreciated experience.” 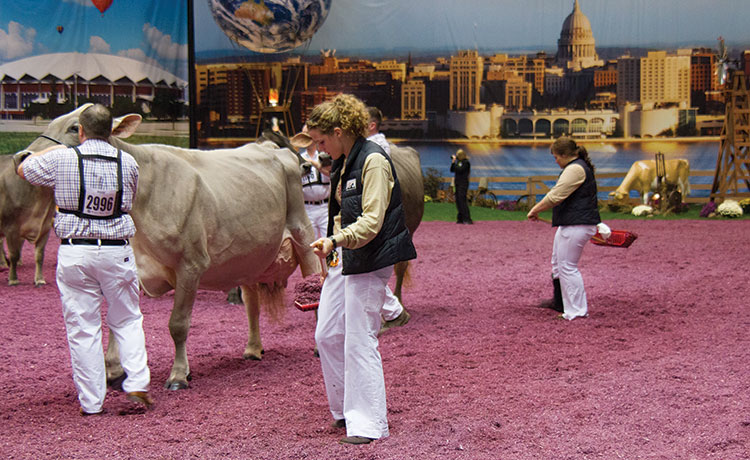 Growing with the show

As the years went by, a partnership that started with just 20 to 30 members assisting with the show grew substantially to include 200 members in the early 1990s. More structured chairmanship roles were also devised, and the world renowned cheese stand, the club’s biggest fundraiser to date, was added to the list of responsibilities on the grounds.

Kevin Jorgensen, of Waupun, Wis., served in various roles for BDC at Expo from 1987 to 1991, including acting as general chair for two years and serving as the chairman of business, grounds, nightline, milk house, and cheese stand. He said the amount of time attributed by the club grew to accommodate the growth of the show.

“During the years that I was part of BDC, our assistance spanned three weeks — we started the week before Expo putting up snow fence around the grounds, moving many of the show materials from the Expo offices to the grounds, and going out to Tate’s Trees to get the dozens of evergreens that were used to surround the showring,” Jorgensen said.

“A group of us also spent the week after the show cleaning out the barns and helping clean up the grounds. Needless to say, many of us didn’t get to a lot of classes during those three weeks, which meant a lot of catching up afterward, but the experience was valuable all around.”

He added that many individuals were involved at that time as it took a great number of people to work nightline and man the seven or eight different barns that housed cattle. A single hour of work at World Dairy Expo paid the member’s club dues for the year.

“One of my most vivid memories was as a freshman getting to work the showring on Saturday during the Holstein cow show and having the best seat in the house as Brookview Tony Charity won for the last time,” Jorgensen said. “At that time, I remember feeling honored to clean up behind the greatest cow on earth.”

As the general chairman of the 2016 show, Henry Holdorf of Ellsworth, Wis., will be responsible for overseeing the work of about 125 members of the BDC throughout the three-week period before, during, and after WDE. While the workforce may not be as large, there are just as many hours involved in the process today as years ago. Holdorf came to UW-Madison as a business major, and after his first year of work with BDC at
Expo, he changed to dairy science.

His roles with BDC have also evolved through his four years, from worker to grounds chair his sophomore year, to co-chair his junior year, and this coming year, general chair. His hours of involvement have also increased from 100 hours to 220 hours, which he says is the average number a chair puts in during the three-week period. Current BDC responsibilities include: warehouse, packaging, setting up schedules, showring assembly, and tent setup as needed prior to the week; grounds work, showring, warehouse work, milk house, cheese stand, and sale setup and take down during the week; and various cleanup following the show.

While missing classes and making up work missed during that time presents its challenges, Holdorf said the benefits far outweigh those challenges. “We provide WDE a good set of workers, and being involved gives BDC a stake in the show, making our members feel like they are a part of it,” he said.

“The cheese stand is still our major fundraiser, and the club involvement fosters good club and industry relations. On a personal note, I feel that I have developed better management skills by working with different personalities, have improved my time management skills, had the opportunity to network with key influencers in the industry, and learned the importance of responsibility and reliability.”

Jorgensen agrees with Holdorf and adds that serving in those numerous roles as a BDC World Dairy Expo chairman benefitted him while attending UW-Madison, but also greatly assisted him in his position as a Holstein sire analyst for Select Sires, other work in the dairy industry, and as a registered Holstein breeder.

“I feel strongly that this partnership has benefitted the students by providing the opportunity to make extra money, to learn how to work as a team while developing leadership and organizational skills, and the chance to interact with both industry leaders and breeders,” Jorgensen explained. “I can say in my own situation that two of my mentors, Dave Selner and Tom Morris, were people whom I first met as part of working at Expo for BDC.”

When Selner reflected on the beginning of this agreement and how it has evolved, he described the transformation of a group that included 50 or so members working on four or five areas of the show to BDC members touching almost all aspects of the show. More importantly, the agreement that was developed early on to provide start-up money to BDC and workforce to WDE has offered members access to some of the best people, cattle, and shows in the world, while fostering the development of real-world skills.

“Many wonderful relationships were developed between staff and students, industry professionals, dairy cattle exhibitors, and commercial exhibitors, some of which have grown into life-long friendships,” Selner concluded. “Students have benefitted greatly, and Expo has the ability to work with a structured, well-managed group of volunteers to assist with their show.”

A sweet surprise
By Amy Ryan 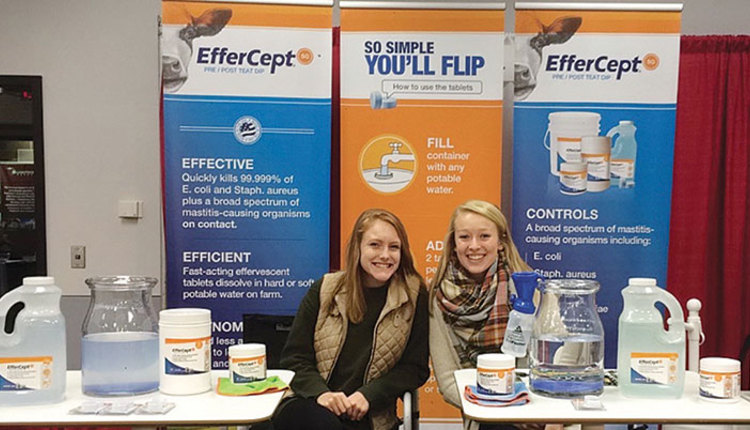 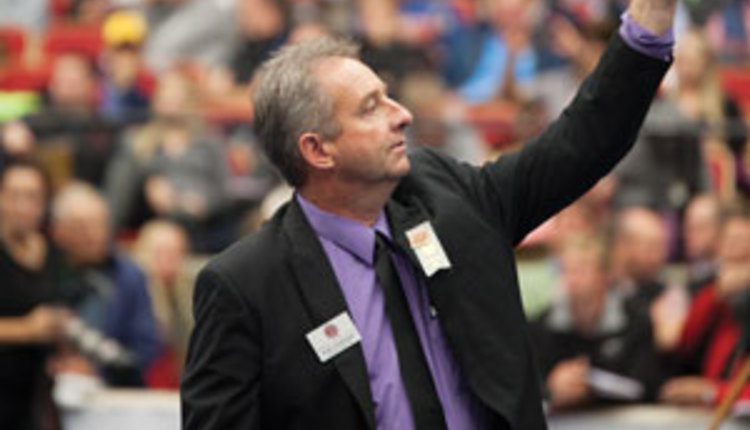 Hoards at Expo
The best seat in the house 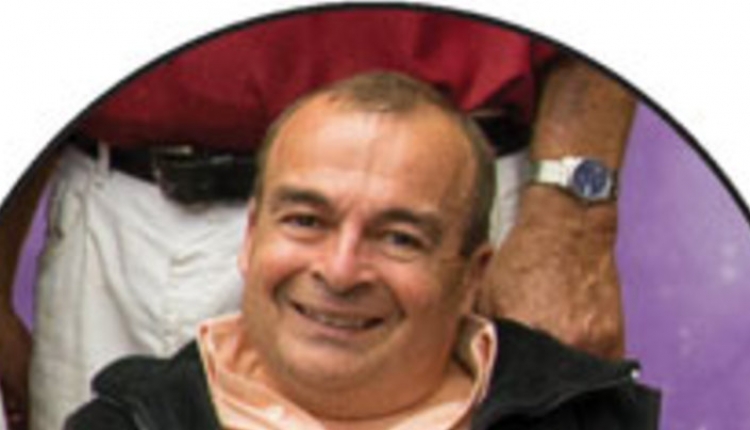 Hoards at Expo
The winds of change
comments powered by Disqus