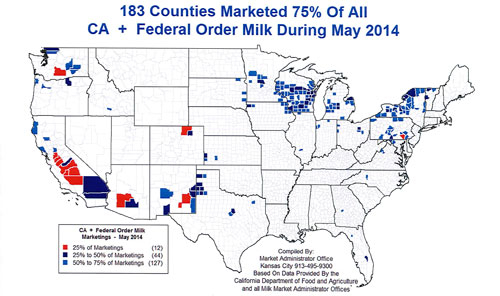 Weld County, Colorado, plus 11 additional counties from last year's analysis, produced 25 percent of the nation's milk this past May. The nation's other "super-milk" counties included seven in California, along with one each in Arizona, New Mexico, Pennsylvania and Washington.

By casting a slightly wider net, 56 counties produced half of the U.S. milk supply, revealed research by the Central Federal Milk Marketing Order administrators based in Kansas City, Mo.

Returning to the information from the Central Federal Milk Marketing Order, if you follow this link, you can review the entire slide deck. It includes counties that marketed: 25 percent of the nation's milk; 50 percent; 75 percent; and the entire milk supply. It also includes a slide highlighting which counties expanded milk production - 763 in total; it also details the 1,138 counties that produced less milk than the previous year.