The dirty jobs matter most

"Master a trade. Get good at it. Learn to love it. Get passionate." This sage advice comes from television host Mike Rowe, who encourages people to find a will to work hard. 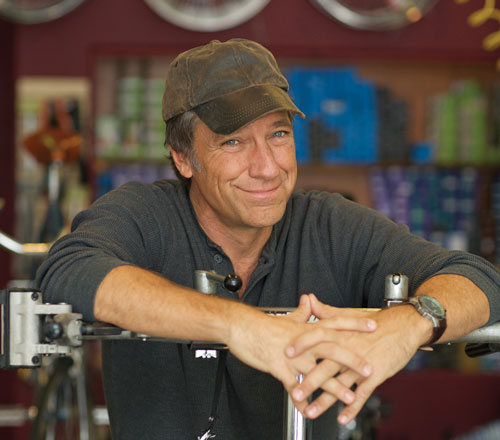 Television host Mike Rowe showed a commitment to the future of skilled workers by starting his foundation, mikeroweWORKS. The foundation promotes hard work, supports skilled trades and awards scholarships to individuals who have demonstrated interest and an aptitude for mastering a specific trade.

Fifteen years into his career as a television show host and reporter, Mike Rowe decided, "I want to do a show about work."

Rowe, most well known for his popular show "Dirty Jobs," was a news reporter in San Francisco at the time. He and his cameraman went out to do a special report featuring the work of a sewer system specialist, and people loved it.

That success spurred about 20 episodes of a news segment called "Somebody's Gotta Do It." The show was later sold to the Discovery Channel and became "Dirty Jobs," which featured more than 300 jobs in all 50 states.

The premise was fairly simple: Rowe went out and worked side by side with people in some of the hardest, dirtiest occupations in America. Fans always ask Rowe, "What's been the dirtiest job?" and "What have you learned?"

"I've learned plenty, and I've learned it firsthand," he said. Interestingly, one sight that left an impression on Rowe was that, even during the recession, there were Help Wanted' signs everywhere. "Employers were having a hard time finding people who wanted to get up early, stay late and learn a skill that's in demand."

Rowe also noticed that the hardest workers were almost always doing things they didn't set out to do. One such person was Les Swanson, a septic tank technician Rowe met in 2004. He had been cleaning septic tanks for several years; before that, he was a guidance counselor. He was big, strong and hardworking. He also loved what he did.

Rowe said, "We were in a tank, literally covered in sewage. It was 110 degrees, and we were knocking cholesterol off the walls. I asked him why he changed jobs. He said he just got tired of dealing with other people's issues. He never dreamed of becoming a septic tank technician, but here he was, loving it and doing a great job."

After spending time with Swanson and countless others, Rowe's advice to people is actually quite simple: Look around. Learn a skill. Master a trade. Do something. Get good at it. Learn to love it. Get passionate.

"It's not about finding a dream job. It's finding a will to work hard," he said.

The worst advice ever
Rowe shared his own personal experience of choosing a career path with the audience at the Wisconsin Dairy Business Association's Dairy Strong Conference. As a senior in high school, Rowe wasn't sure what he wanted to do when he grew up. During a visit to his guidance counselor's office, he saw a poster hanging on the wall that said "Work smart, not hard."
The poster showed two young men. One was smiling brightly, wearing a cap and gown and holding a college diploma. The other was working as a tradesman covered in dirt, with a defeated look on his face. The guidance counselor asked Rowe which of these men he wanted to be.

Ideally, Rowe would like to see a similar poster that said, "Work smart AND hard." It would show a young person who is technical, successful and perfectly trained for his job.

Is farmer a bad word?
How do we get youth excited about "dirty jobs," including those in agriculture? An eye-opening moment for Rowe was when he was asked to speak at the National FFA Convention. Right before he went on stage, he learned that "farmers" was no longer in the title; the organization simply uses the acronym FFA.

It shouldn't be. Farmers are doing the world a tremendous service, but many consumers don't even realize it. "One percent of the population is feeding the world three times a day. That's a great message to have," Rowe said. "It's easy to take food for granted: where it comes from and who provides it. You're a victim of your own efficiency and success."

In his own way, Rowe has been able to bring attention to skilled trades, like agriculture, that may often get forgotten in everyday life. He said, "My theory is very simple: Foster an appreciation for all the things this country has become disconnected from but relies on the most."

Agriculture and mining stand out
Rowe grew up in Maryland with his parents and two brothers, about three miles outside of Baltimore. For the first 12 years of his life, he lived in a house his grandfather built on 100 wooded acres. His family boarded horses, raised livestock and had a 1.5-acre garden.

Still, Rowe found himself distanced from agriculture. And even though he had family members working in agriculture and skilled trades, he had become disconnected. "For me, Dirty Jobs' was somewhat of a personal journey," he noted. "It forced me to reconsider all I have taken for granted."

Rowe interviewed many farmers over the years. One of his most memorable stops was his first dairy farm visit. The California farm was owned by Harry Anderson, who was also a minister. Rowe and his cameraman went to Anderson's church, then out to his farm to collect semen from a bull and breed some cows.

The segment first ran on a local TV channel, and people went bananas, Rowe said. "It was at that point that I knew I was on to something."

Another memorable dairy visit was Fair Oaks Farm in Indiana. All the technology, the efficiencies, dealing with the cold and delivering calves left a mark on Rowe. Most memorable, though, was when the owners, Mike and Sue McCloskey, found out Rowe and his six-man crew were staying in a hotel. "They insisted that we stay with them in their home, instead," Rowe said. "People and experiences like that are why I keep going back to farms."

"There are lots of careers, jobs and vocations," Rowe explained, "but the two that stand out to me are mining and agriculture. Every job requires something from those two industries.
"When I look around I see those two industries all the time," he went on to say. "Those are the vocations that matter most."

A look back and a look ahead
Features
Related to:
features, youth
In Features

Don’t let injuries get you down
By Hoard's Dairyman staff