A shift toward group housing calves is taking place; now we must decide what size of group is best.

By James Vinyard
The author is a junior at Purdue University working in the USDA Livestock Behavior Research Unit. 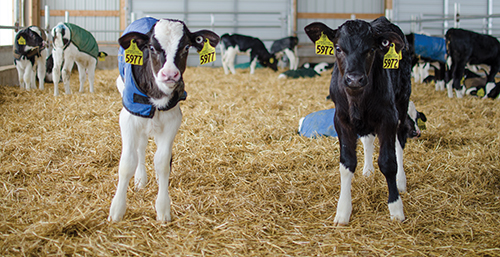 Group housing will be mandatory for veal calves by December 31, 2017, but some dairy producers are choosing it for their heifer calves, too.

In the United States, the gold standard for raising dairy calves, whether in hutches, pens or crates, has been individual housing. This method prevents cross-contamination and cross-sucking between animals.

In an individual setting, waste handling and the health of the animals are much more easily assured. However, the American Veal Association called on all United States veal producers to transition to group housing by December 31, 2017, in order to address the mounting pressure stemming from various animal welfare groups. In the future, there could be a call to all dairy producers to transition from individual to group housing, as well.

The USDA Agricultural Research Service's Livestock Behavior Research Unit (LBRU) at Purdue University in West Lafayette, Ind., looked at the various outcomes of placing calves in different sized groups. The LBRU partnered with Strauss Veal Feeds Inc. in North Manchester, Ind., and used 168 Holstein bull calves from their starter barns. The calves were housed two per pen until the beginning of the experiment where they were assigned to one of three treatment groups: two, four or eight calves per pen. The size of the pens grew as the number of calves in the pen was raised, so each pen allowed for the same amount of space (19.59 ft2) per calf.

The barn, which was new and used natural lighting, was kept above 50°F, and the pens were situated on heated concrete slats that required no additional bedding for the calves. Each pen was equipped with a metal feeding trough that was separated into individual portions for each calf. The hypothesis behind the experiment was that the calves housed in groups of smaller numbers would exhibit lower rates of disease and aggression, improved growth rates and lower concentrations of cortisol in the blood.

The calves were observed one day a month for a period of five months using a scan sample every five minutes during a 30-minute observation period. Video was recorded from 7 a.m. until 7 p.m. On Days 0, 1, 5, 14, 42 and 70, after the calves were placed into their assigned groups, behavior observations were made before, during and after feeding. This was mostly done to look at the oral and aggressive behaviors that would be seen between calves.

The calves in the two larger groups showed more contact with each other, walking and standing more than the calves in the smaller groups. However, they showed less object manipulation, self-licking and lying down than the calves that were housed in pairs. There was no observed difference in play behaviors between any of the various group sizes. Aggression also did not vary between group sizes at feeding.

In groups of four and eight, there was a greater instance of coughing in the first month than in the calves that were in groups of two. However, by the second month, only the groups of eight had higher instances of coughing. Discharge from the eyes and ears and fecal samples were scored using the University of Wisconsin health scoring chart. There were no observable differences in the eye and ear discharge scores or the fecal scores between the various sizes of groups.

Despite the coughing, there was no observed difference in growth rates between the three group sizes. Hip height and heart girth were measured, and with calf age both rose.
Blood samples were taken from each calf prior to the start of the experiment to determine that each calf was within a healthy range for blood hemoglobin concentration (Hb), packed cell volume (PCV), and red and white blood cell counts (RBC and WBC). Forty-two calves for groups of eight, 13 for groups of four and 10 for groups of two were treated for iron deficiency at the beginning of the experiment.

Each calf received prophylactic treatment of oxytetracycline and linomycine spectinomycine (LS-50) added to their milk for two days after they arrived at the finishing barn. Every calf received milk replacer and calf starter twice each day at 5 a.m. and 5 p.m. The calves were given a mixture of liquid milk replacer that was 16 percent crude protein and 4 percent fiber that was added into an individualized trough through a hose. The calves were then allowed 15 minutes to eat a dry grain mix that was 12 percent crude protein and 4 percent fiber in the same trough. After that time was over, water was added to the trough.

This study was conducted in an effort to observe calves in different group sizes with equal space per calf. Other studies have been conducted to look at the effect of grouping and regrouping with different size areas for each calf in large groups, which allows for a calf to select an area of the pen that they prefer. However, large areas with large groups could pose problems with development, both behavior and physiology, that may create problems for production.

Eating and drinking behaviors varied between group sizes but did not alter the overall growth of the calves. The amount of time spent eating throughout the day shrunk as group size grew, which could be caused by the larger amount of social interaction between more calves.

The greater amount of coughing seen during the first two months in the groups of four and eight could have been caused by close physical contact between calves; however, it did not lead to more health problems among those calves.

With growing interest in group housing and automatic calf feeders, more research is needed to analyze ideal group sizes, and we don't know that answer yet. While regulations over dairy calf housing may not happen tomorrow, we can learn from our friends in the veal industry and start preparing now by deciding the best group size for our girls.