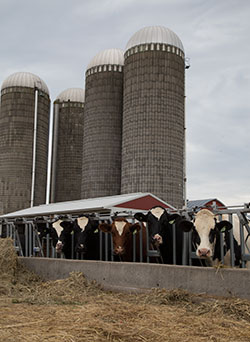 For years, greenhouse gas (GHG) emissions from the dairy industry have been a source of media attention. In the atmosphere, GHGs enhance the effects of radiation and can raise surface and atmospheric temperatures.

"When it comes to dairy, consumers have two major misperceptions: that dairy cattle have a major impact on global warming and that cattle compete with humans for food," noted Joanne Knapp, Fox Hollow Consulting, at the Tri-State Dairy Nutrition Conference.

Once we've connected with consumers on an emotional level, we can begin to share the facts our industry has curated in regards to dairy production. During her presentation, Knapp shared information that can be used to dispel the above myths regarding dairy production.

Fact: Dairy cattle are a minor contributor to total anthropogenic GHG emissions in the U.S.

Methane from rumen fermentation and manure comprise more than 40 percent of the GHG emissions associated with fluid milk production. Yet, developed nations have the most efficient production systems per unit of milk produced.

Fact: Production practices in the U.S. minimize the environmental impact of dairying.

Improvements in production efficiency are essential to feeding a growing population. It is projected that global dairy product demand will exceed 1.1 billion tons by 2050. Intensification can minimize the impact of dairy production on feed, water and land utilization, while reducing GHG emissions per unit of milk.

Fact: Grain, the only part of a U.S. cow's ration that is potentially edible by humans, comprises less than 20 percent of the total feed utilized in production.

Ruminant livestock have the unique ability to convert large amounts of inedible plant material to edible foods for human consumption. Ruminants also have a greater capacity to utilize by-product feeds.

By-products typically comprise 20 to 25 percent of livestock and poultry diets in the U.S. From 2009 to 2013, an estimated 137.5 million tons of by-products were produced from the processing of human food. Feeding these products to livestock, as opposed to other disposal methods, greatly reduces the carbon footprint of human food consumption.

China’s dairy imports could flatten out
By Hoard's Dairyman staff