Is drought a factor in California milk drop? 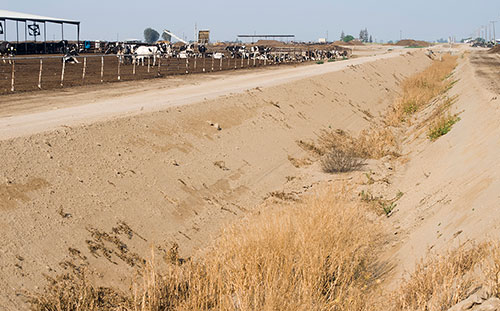 An irrigation ditch between two dairies in central California
that has not held water in almost three years.

Maybe it is just a coincidence. Or maybe it's not.

Years one, two and three of California's continuing historic drought saw new records for low precipitation and high farmer frustration. Due to their cumulative effects, the outlook for year four – even before it began – was that it would be worse.

And it has been so far, with falling milk production suggesting that feed supplies, feed quality, and/or heat stress are taking a higher toll on producers in the nation's biggest dairy state.

According to USDA-NASS data, production per cow and total output in California have fallen every month so far in 2015 (January through April). At the same time, cow numbers have been slightly lower.

Since January, production per cow has been 40 to 65 pounds less every month compared to the year before, during what was seldom anything other than mild, dry weather in all major dairy areas.

Total statewide milk production has been 2.1 to 3.5 percent lower every month versus the prior year and is 2.8 percent lower for the year to date.

Production declines are headline material when they happen in California, and 2.8 percent makes a big difference in the U.S. milk bucket. If that figure were to continue for all of 2015, it would amount to over 1.1 billion pounds less milk being produced.