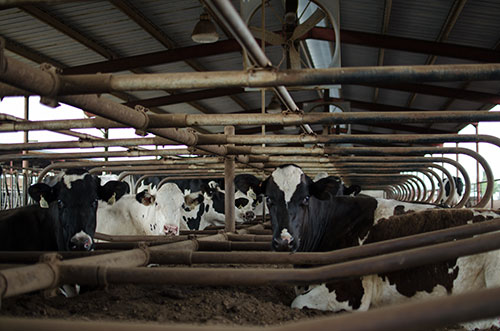 Adequate lying time is essential to maintaining milk production. When our cows heat up in conjunction with rising ambient temperatures, their natural inclination is to stand in an attempt to reduce their core body temperature. Our highest producers are the most sensitive to these temperature fluctuations.

A rise in air temperature from 78°F to 104°F reduces eating by 46 percent, ruminating by 22 percent and boosts standing by 34 percent. Unabated heat stress reduces feed intake by 35-plus percent. Even on well-managed farms, heat stress can easily reduce intake and milk yield by 10 to 15 percent.

Cornell University researchers have found that, during heat stress, core body temperature mediates the cow's standing and lying response. "As a cow's core body temperature approaches 102°F, it stands in an effort to speed cooling - at the expense of milk production," noted Rick Grant in the Miner Institute Farm Report.

Cows won't lie back down until their core body temperature drops to approximately 100.9°F.

Since our highest producers are the hardest hit, we need to implement more aggressive and creative heat stress abatement strategies. Heat abatement, therefore, should be targeted toward both the feeding and resting areas, added Grant.

While evaluating a heat abatement system that cooled cows both in the stalls with fans and water and over the feed alley, Miner Institute observed greater resting times and more rumination. The group will continue to evaluate the system through the summer.

While fans and sprinklers over the feed alley cool the cow, we also run the risk that cows will loiter in the feed area without eating. In turn, this shortchanges the time they spend lying down, noted Grant.

Resting is the cow's most valued behavior, and we must do an effective job of cow cooling to get cows into the stall and lying down so that their resting requirement is met.

A system that cools in the stalls and along the feed line should be ideal, as it optimized both feeding and resting behavior, said Grant.

Milk class payments are out of whack
By Hoard's Dairyman staff