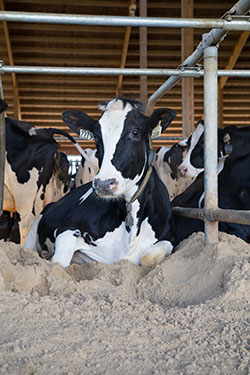 The sphincter muscle and teat canal keratin are the cow's first line of defense against bacteria. If a clean and dry environment is not maintained, teat ends are then exposed to and overloaded with potential pathogens.

The more bacteria on the teat end, the greater the chance they will penetrate the keratin and invade the teat. When pathogens breach these barriers and multiply, white blood cells are called into action and attempt to prevent bacterial growth.

As sand bedding becomes saturated with urine, milk and feces, organic matter content rises, dry matter drops and bedding quality is impaired. Ideally, cows should be bedded with sand that is less than 3 percent organic matter and greater than 95 percent dry matter.

Researchers from the University of Illinois investigated the association between bedding material and milk quality on 20 Illinois dairies. Dry matter was quantified for all bedding types, while the organic matter percentage was evaluated on sand-bedded farms.

Of the dairies evaluated, 16 used sand bedding. Of these, 32 percent had a combination of sand and a different type of bedding such as straw or compost. On average, sand bedding had a dry matter of 92 percent and contained 3 percent organic matter. Milk yield per cow per day was 79 pounds, and bulk tank somatic cell count was 204,000 cells/milliliter.

As the organic matter in bedding rose, so did the bulk tank SCC. A similar relationship was not seen for dry matter percentage. Despite their small sample size, researchers affirmed that higher organic matter levels in bedding were associated with a higher bulk tank somatic cell count. This, in turn, puts cows at a greater risk for contracting mastitis and impairs current and future milk production.

These milking system issues trip up many of us
Features
Related to:
Intel, bedding, milk quality
In Hoard's Dairyman Intel