In Italy, BSE worries are back 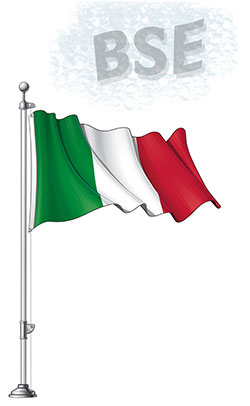 The death of two people in the same city in southeast Italy last month, attributed to extremely rare Variant Creutzfeldt-Jakob Disease (CJD), is raising concern that bovine spongiform encephalopathy (BSE) may have reappeared in the food supply. CJD is the human form of BSE.

Italian health officials, who point to vigorous control and screening measures adopted by the European Union in the wake of the continent's BSE epidemic more than a decade ago, say they are highly confident that it has not, but have not yet ruled out infected beef as the source.

A relative of one victim has accused trade officials of allowing beef imports into Italy from the Balkans, where strict BSE policies have not been adopted.

The two victims, a 49-year-old woman and a 67-year-old man, died 10 days apart in the same hospital in Lecce, which is located near the bottom of the "heel" in Italy. Its population of roughly 93,000 is one reason for the new concern about BSE, since the normal occurrence of CJD worldwide each year is about one case per 1 million people.

However, local health officials say that so far in 2015 there have been four confirmed cases of CJD in the entire region around Lecce. Another reason is that memories of Italy's BSE outbreak early last decade are still fresh in the public's mind.

According to the World Organisation for Animal Health (OIE), the first two BSE cases identified in Italy were in 1994. No others were found until the epidemic exploded in 2001. There were 48 cases that year, followed by 38 in 2002 and 29 in 2003. The last two confirmed cases were in 2008.

The U.S. has had a total of four BSE cases, three of which were determined to be atypical, or the result of "natural" factors that exist within any population of mammals.

Tests are underway on brain tissue samples from the two cases in Lecce to determine which form of CJD was involved.