“Boots on the ground” provide service

The world's largest Mozzarella manufacturer became a local company halfway around the world by opening a business center in Singapore. 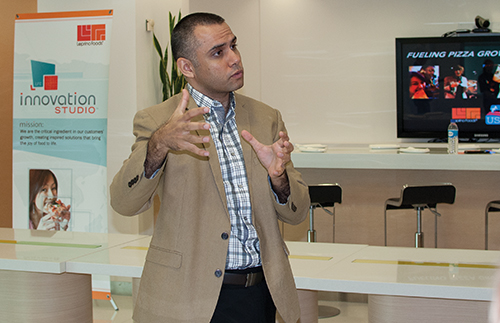 Leprino made a strong investment in people and resources by opening its Innovation Studio in Singapore. Rohan Thakur is one of the 10 team members who have made Leprino and U.S. cheese local in Asia.

When Leprino Foods opened its second "Innovation Studio" in Singapore just four short years ago, it sent the strongest signal possible to its Asian customer base: Leprino is committed to being a long-term partner with its customers in nurturing dairy product sales. Through its new studio based essentially halfway around the world from its corporate headquarters, Leprino's chefs and other dairy product experts can now help develop and create cuisine that appeals to the wide variety of food palates in Asia. Most importantly, they can do so in a side-by-side setting with customers. And in Asia, that business day starts as the U.S. workforce begins clocking out.

"Help someone solve their problems and grow their business, and they will become a long-term customer," he said.

"Our currency is ideas," said Thakur who works out of Leprino's Singapore office and travels throughout Southeast Asia 60 to 70 percent of the year.

"Local market knowledge can only come if we have local talent here that understands it, evaluates it and creates solutions that work here," said Thakur who comes from an Indian (Asia) heritage. "There's a real understanding because we now talk the language of our customers."

Leprino Foods started as a neighborhood grocery store in Denver, Colo., in 1950. Since that humble beginning, the family-held organization has transformed itself into the world's largest producer of Mozzarella cheese. It also ranks among the largest suppliers of lactose, whey and whey protein, making it one of the most significant U.S. dairy exporters.

With 10 plants throughout the U.S. and the United Kingdom, Leprino Foods originally developed an Innovation Studio at its Denver-based hub to help customers develop new products using Mozzarella and other cheeses it produces in its U.S. plants. As the company grew its international presence, it soon realized it needed to broaden its approach.

"As Jim Leprino so often tells us, We need to learn how people actually eat the product,'" Thakur said during an interview at Leprino's Singapore Innovation Studio. With that approach in mind, Leprino can now offer its Asian customers the same experience as it does in America.

"If you look at cheese consumption growth across the world, it's growing the fastest in this region," said Luis Pedroza, an Asian-Pacific marketing specialist for Leprino. "The growing dairy product culture doesn't start with cheese," he pointed out. "It starts with milk powder, moves to fluid milk, then yogurt and eventually cheese."

How those dairy product sales develop varies in each country. With that in mind, Leprino has determined that having customer support in the region is essential to tell its story and introduce consumers to American-style Mozzarella.

"We can leverage our strengths, our technology, and milk from U.S. dairy farmers to help create products for potential customers that allows them to have a competitive advantage in the market to meet their consumers' needs," said Pedroza. "When we do that, we have created a winning solution. Ultimately, we really want to help our customers grow."

Cheese is at the core of Leprino's work in Asia. And just like the U.S., much of that cheese - especially Mozzarella - ends up being served on pizza.

"Unlike the pizza experience in the U.S., which grew out of immigrants as affordable food, it's quite the opposite in Asia," said Pedroza. "Pizza was brought over as a premium food. In South Korea and Japan, it's not uncommon to see pizzas that are $30 to $40 for one pie. When a pizza costs that much, it better be more than just filling a stomach . . . it also better be entertaining," Pedroza went on to say.

The upside is tremendous in the world's most populated region. The per capita consumption of pizza in South Korea is 1.5 pies per year contrasted with 17.5 in Great Britain and 20 in the U.S. Presently, other Asian nations have consumption patterns that mirror South Korea, but that is changing rapidly.

Foods that appeal to locals

Leprino's Innovation Studio features a commercial-level kitchen where its chefs can help customers create foods that appeal to their local clientele.

"Before I came to Asia, I felt Asians were Asians," said the American-born Pedroza, whose mother is Chinese (Taiwan) and father is Mexican. "They are so different. You have to think about median age, monthly wage, years of education and religion. Since the people are so different, of course, the pizzas are different."

"Ovens are the crux of our customer's business," said Monika Reitmeyer as she enthusiastically gave a tour through Leprino's Innovation Studio kitchen filled with the latest cooking equipment and instruments. Reitmeyer is Leprino's Asian Pacific innovation manager.

"We focus on having the exact equipment that our customers do so we can look at products and simulate products just as they would in their stores," said the culinary expert.
"Our customers are looking for foods that are fun, flavorful and authentic," said Reitmeyer when discussing how Leprino introduces Mozzarella into Asian food menus.

"The cool thing about Asia is that customers really like putting ingredients inside stuffed crust," said Reitmeyer. "We've been working on putting things like bacon jam or Asian barbecue pork (known locally as bakkwa) inside the crust along with cheese, of course."

"Seafood is really big with Asian pizzas, too," said Reitmeyer. "Ultimately, it's about providing customers with a great eating experience. U.S. cheese offers a really nice flavor and color on bakery products in the retail space," said Reitmeyer. "That's important throughout many Asian eateries because products need to be on display for one to two hours after being out of the oven."

Leprino's commitment to its growing customer base and to U.S. dairy is just one of the many positive stories unfolding throughout Southeast Asia. While many of its counterparts also have "boots on the ground" throughout the region, Leprino remains one of the first to establish a physical presence in the region.
"The speed of business is very fast in Asia," said Reitmeyer. "Having people based here to respond to a request in hours is really important to growing our business."
Click here to return to the Dairy Policy E-Sources
150925_587