California is on pace to make less milk Excitement about last year's record-high Class III prices is long gone in California, where total milk production is well on its way to being lower in 2015.

According to USDA-NASS milk production data through August, total output in California has been less every month so far this year, by an average of almost 112 million pounds per month.

Eight hundred ninety-five million pounds (3.11 percent) less milk has been made so far in 2015, and if that rate continues for four more months, the total decline will be 1.3 billion pounds.

Less milk is big news in the nation's largest dairy state for a couple of reasons. First, because California increased total output for 30 years in a row from 1979 to 2008. Second, because it would be the second decline in three years, which hasn't happened in over half a century.

There are no indications that the trend will turn around any time soon, either. In fact, an ominous long-range weather outlook suggests that California's production could keep falling.

The National Oceanic and Atmospheric Administration (NOAA) said all summer that conditions were growing for a strong El Niño weather event along the Pacific coast in general and in California in particular. Its latest reports have said it could last all winter and perhaps into spring 2016. 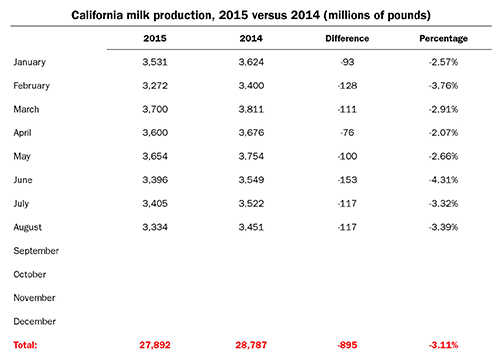