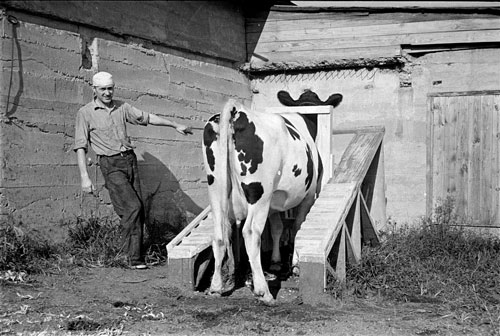 1935: A farmer in Prince George's County, Maryland, has his cow loaded in a breeding ramp and ready for the farm bull. (Photo by Carl Mydans)

Halfway through the Great Depression, President Franklin D. Roosevelt recognized it was a transformational time in the nation's history, a period he said America was at her most vulnerable.

From 1935 to 1945, photographers were sent to all 48 states to record the daily lives and experiences of Americans at home, work and play. Some of them are now regarded as American icons of the medium, such as Dorothea Lange, Walker Evans, Marion Post Wolcott and Russell Lee.

The results of that project are maintained by the Library of Congress, which, in collaboration with Yale University, has just made the entire collection of 175,317 images available on the internet at: www.loc.gov/pictures/search/?st=grid&co=fsa.

Only a handful of dairy-related images (645) were taken, which can be seen at: www.loc.gov/pictures/search/?q=dairy&st=grid&co=fsa.

The Great Depression was a time of dashed hopes and broken dreams. It was a time of never-ending need, want, making do, and doing without – because there were no other options. It was a time of relentless bankruptcies, foreclosures, unemployment and federal relief payments. And the Dust Bowl.

In California The Grapes of Wrath wasn't yet a book, it was very real life.

Millions of people struggled to eat on a regular basis - and millions failed to do so. Only 10 percent of farms had electricity. Among farms reporting milk cows, average herd size was 5.4. Production was about 4,600 pounds per cow. Farm milk prices were less than $2.

Those who lived through the Great Depression weren't just affected, they were changed forever. And it was an experience that drove them to impress its lessons about debt, waste and self-reliance upon later generations.

The photos of antique tools, methods and settings are a compelling look at a bygone industry that in many ways was far more difficult and uncertain than what producers face today. Would anyone want to trade with them?