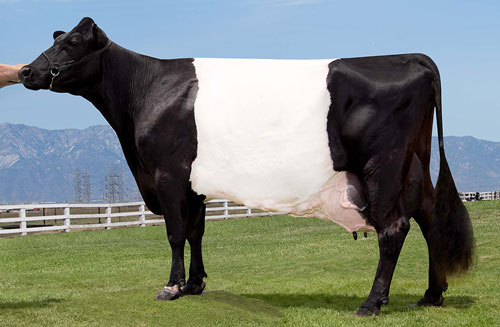 It had never happened before in the 129-year history of the Dutch Belted Cattle Association (DBCA) – and perhaps no one ever imagined it would:

At last month's classification of Heritage Pride Farms in Chino, Calif., owned by Ronald C. Pietersma, a homebred registered Dutch Belted cow and a bull both scored EX-94, the highest possible number recognized by the breed. The Dutch Belted breed uses the same rigorous scoring scale as Brown Swiss and Ayrshires do.

The EX-94 scores are an almost unimaginable achievement for a breed that just 20 years ago was literally on the brink of extinction, with just 500 purebreds estimated to exist worldwide. Today, herd size at Heritage Pride Farms is twice that number.

According to DBCA president Cory Upson, who was shocked to hear about the EX-94 scores, the total number of cattle registered by the association from 1984 to 2004 was less than 100. By comparison, it registered 1,118 animals in 2014 alone.

With 1,007 milking and dry cows in its drylot facilities, Heritage Pride Farms is the largest Dutch Belted herd in the world by far. It also continues to grow every year due to the breed's extremely high fertility, disease resistance and longevity.

Interestingly, however, it isn't the first to have more than 1,000 head. Historic reports say White Belt Dairy in Lemon City, Fla., owned by John G. DuPuis, M.D., milked 1,000 cows in the 1930s, but it was nearly wiped out by an outbreak of tuberculosis.