One change at a time 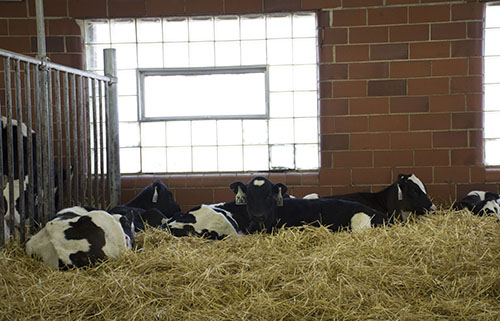 For calves, the weaning period is almost always filled with change: a new home, new ration, new penmates, new health challenges. This transition can be overwhelming.

If animals become too stressed during the weaning period, early gains from an intense preweaned calf program can be lost quickly. For that reason, Nehls Bros. Farm in Juneau, Wis., limits changes for transition calves to one at a time. The dairy's manager, Jerry Gaska, D.V.M., shared details about the farm's young stock program during the Dairy Calf and Heifer Association's (DCHA) annual meeting held in Middleton, Wis., last week.

Calves start out in individual hutches on the 2,100-cow dairy. After weaning, the next stop is the transition calf barn, an old cow barn remodeled to include 10 pens of eight calves. To make this move easier, calves receive the same starter fed in the hutches. On Day 5, hay is introduced, and then on Day 9, the farm starts to mix in refusal starter from the hutch calves (which is cleaned out on a daily basis).

These gentle ration adjustments continue as the heifers get older. When calves move out of the transition barn and down the road to the heifer facility, they are fed that same starter and hay ration until they are acclimated to the new location, and then TMR is introduced.

Another trick Gaska said has helped ease the transition is the addition of an extra water tub in each pen. Even though waterers were readily available, they noticed a drop in starter intake and extra bellowing when calves were first moved into the barn. A few years ago, they decided to provide this additional source of water, and Gaska noted, "The effect it had was quite dramatic." Those tubs are removed one week later, and by then calves are well adjusted to the new system.

Vaccinations also follow a careful schedule and are stretched out so that calves aren't overwhelmed.

"We really subscribe to the one change at a time philosophy," Gaska said, and the results have been positive. Every calf is weighed at birth, when moved into the transition barn, and when moved to the heifer facility. Current gains are 1.85 pounds per day in the hutches and jump to 2.1 to 2.2 pounds per day in the transition barn. Also, of the 1,100 normal, healthy heifer calves born last year, death loss was just 0.6 percent.