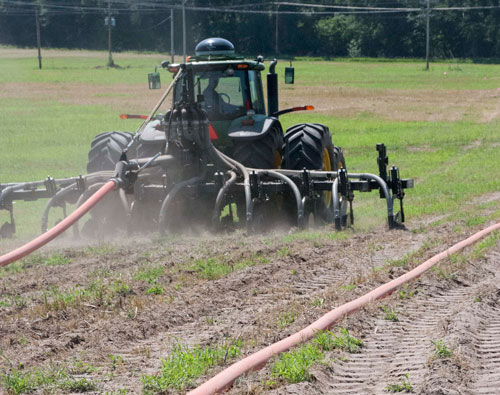 Whether perceived or real, the aforementioned regions have been epicenters for concerns regarding dairy nutrients, mainly manure applied to nearby land.

Each area has a unique story. In the case of Wisconsin's Kewaunee County, an independent three-year study is taking place that involves the University of Wisconsin-Oshkosh's Department of Geology and USDA's Agricultural Research Service (ARS). The entire project is being funded by the Wisconsin Department of Natural Resources (DNR).

Located in the northeast portion of the state, Kewaunee County is home to over 100 cows per square mile, making it one the nation's most densely populated dairy areas. Much of the area's topography includes the Niagara Escarpment that stretches throughout the Great Lakes Region from New York to Wisconsin. While the limestone outcroppings are a beautiful feature, the stone that pushes up through the soil's surface also can be considered a liability. So, too, can the shallow layers of soil found over the limestone bedrock and the rock fissures that can extend deep into the earth. It's these features that have caused some in the community to question whether or not nutrients and bacteria found in manure are making their way into nearby wells.

Earlier this month, Wisconsin DNR Secretary Cathy Stepp shared some preliminary data with the press. The study has been looking at 323 wells in the area. Preliminary results indicate that nitrate levels have been consistent with statewide averages for agricultural areas and those locations without sewers for nearby homes. DNR Secretary Stepp also pointed out that five wells did test positive for E. Coli . . . although the sources have not been pinpointed.

Also this month, salmonella and rotavirus were both found in a subset of Kewaunee County wells during the ongoing study. However, it is too early to pinpoint the contamination found in 11 of the 20 wells, according to a Milwaukee Journal Sentinel report on May 4, 2016, by Lee Bergquist.

Those results came from the next part of the study that started this April. Future sampling will take place in July, later this fall, and in the winter, said Mark Borchardt with USDA's Agricultural Research Service. The water samples have been drawn from a randomized sample of Kewaunee-area wells. Those wells were further classified into three groups based on depth to bedrock . . . not depth of well.

Nearby farmers living in the community have been working as a group to discuss and address water quality.

Peninsula Pride Farms is a nonprofit organization that includes 40 farmers in Kewaunee County and its neighbor to the north, Door County. Don Niles serves as president for the group, and an early project included a field day measuring depth of soil to bedrock.

Over the course of the next year, science will reveal more definitive results into the groundwater woes in the Kewaunee County region. While some environmental groups place blame on the cows found in the area, the likely result will be a multiple list of concerns that could also include shallow wells and a comprehensive need for updated septic systems for nearby homes. Also on tap could be updated practices and manure treatment options on managing the area's unique rock features in the Niagara Escarpment region.

The good news, thanks to folks like Mark Borchardt, is that there will be a science-based answer after this three-year long study.