No word yet on a California FMMO 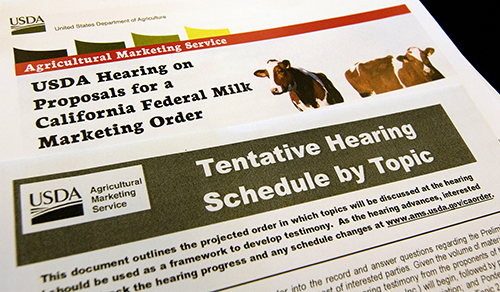 A year after public testimony began on a proposal by California's largest dairy cooperatives to create the biggest Federal Milk Marketing Order (FMMO) in the country, producers are still waiting for a decision by USDA.

Silence from the department is standard procedure in these situations, and there are a few reasons why additional months of waiting should be expected.

One is the hearing itself. California's dairy industry, which has operated under a unique statewide milk pricing system since 1969, had never seen anything like it. Testimony began September 22, 2015, and ended on November 18. It resulted in an 8,143-page official transcript, not to mention hundreds of supporting exhibits, briefs, and follow-up comments that accompanied it. It is a mountain of material that USDA must digest before it can issue a plan for producers to vote upon.

The hearing transcript and all related materials are available here.

Another is the presidential election. It may not be written down that USDA has to wait until after the country votes on November 8, but anything else would surprise me.

Number three is gravitas. A California FMMO is a serious decision that can't be rushed. It would be the biggest federal order in the country, affecting hundreds of millions of milk price dollars per year - and not just in California. USDA projects that California cheese milk prices would go up significantly, while other orders would see varying declines.

What happens when you combine winners, losers, and that much money is reason number four. It is pretty much a foregone conclusion - especially in California, which has the second most lawyers in the U.S. - that anything USDA proposes resembling the co-ops' plan, rather than what was submitted by processor groups, will result in a lawsuit being filed against it.

Rob Vandenheuvel, general manager of Milk Producers Council in Ontario, Calif., says the financial situation that drove producers to seek an FMMO in the first place - longtime disparity between California Class 4B prices and corresponding FMMO Class III prices - narrowed to 69 cents per hundredweight in August. That's a far cry from when it was over $2, but he says it still amounted to more than $10 million that did not go into producers' pockets.